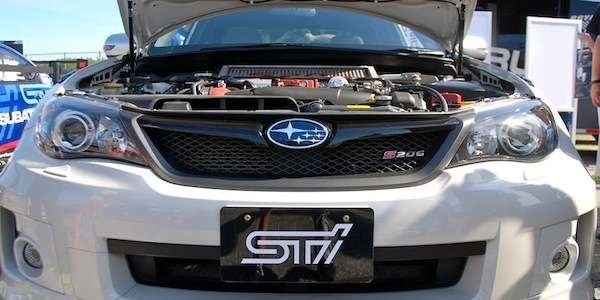 Subaru is one of the only automakers to use the Boxer engine design besides Porsche. Why do they use the flat four in WRX/STI?
Advertisement

Subaru wanted to get involved and compete in the World Rally Championship and created the compact Impreza-based WRX for motorsports. They were very successful and won the title three times.

The latest generation 2016 Subaru WRX uses the same technology from the turbocharged “FA”-Series aluminum boxer engine. Why does Subaru use the boxer engine design in all their vehicle over more conventional engine configurations?

The flat, H-shaped, opposed-piston “boxer” engines have been fairly rare in recent years and Subaru is one of the only automakers to use the Boxer engine design besides Porsche. The rear-and mid-engine German Porsches and front-engine, all-wheel-drive Subarus, built by Fuji Heavy Industries (FHI) still use them.

There are three main reasons why Subaru and Porsche still use them. The main advantages to use the boxer engine is its good dynamic balance, it has a low center of gravity and it offers low-hood packaging.

One of Subaru’s core values is that all of their all-wheel-drive vehicles offer sporty driving dynamics, not just WRX and WRX STI performance cars. This is appealing to a new generation of buyers who use their vehicles for recreation and want a vehicle that offers superior handling on and off road.

Even with their higher ground clearance, the lower center of gravity keeps the vehicles from leaning in the corners. Subaru’s motorsport involvement perfected the engines and chassis to perform at a high level. FHI and STI transferred this knowledge directly to their production vehicles.

In their early years, Subaru’s flat-four boxer’s were criticized for being “buzzy”, unrefined and not very fuel-efficient. That has changed with the new-generation 268hp 2.0-liter turbocharged, direct-injected Subaru FA boxer 4-cylinder powerplant.

The engine has earned high praise from the experts for its “eager response and strong performance” that fits the rally-bred WRX/STI performance cars. Last year, the 2015 Subaru WRX model’s 2.0-liter turbocharged 4-cylinder Boxer engine was named to the prestigious Ward’s 10 Best Engines list. The powerplant was recognized for its engineering, performance, drivability and efficiency.

The 2016 Subaru WRX/STI’s boxer engine has good dynamic balance, a low center of gravity and it offers low-hood packaging. It’s a formula that works for the Japanese automaker in all their vehicles.