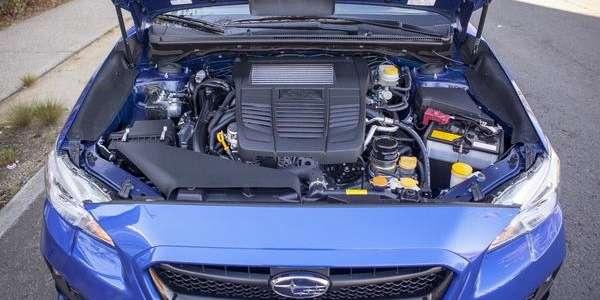 2015 Subaru WRX adds another award to its expanding trophy case

The new 2015 Subaru WRX performance sedan has received many awards in its first year. Now WRX gets another to add to its expanding trophy case.
Advertisement

The 2015 Subaru WRX has received many awards in its first year for Best Sports Sedan, Residual Value Award, IIHS Top Safety Pick and others, now WRX gets one for its new 2.0-liter engine. The new 2015 Subaru WRX gets an award from Ward’s for its new 2.0-liter engine and recognized for its engineering, performance, drivability and efficiency. The 2015 WRX model’s 2.0-liter turbocharged 4-cylinder Boxer engine was named to the prestigious Ward’s 10 Best Engines list.

WRX returns to its roots

The new-generation Subaru WRX was completely redesigned and re-engineered for 2015, and one of the biggest changes came under the hood. The new performance sedan debuted a new 268-horsepower 2.0-liter direct-injection turbo Boxer engine. This was a return to its roots as the first 2002 U.S. spec WRX came with a 2.0-liter 227hp turbo engine. The 2015 WRX engine is the all-new 2.0-liter FA turbocharged Boxer version of the new Forester 2.0 XT powerplant. But the WRX version uses different cams and higher-rate valve springs and other enhancements to enhance the performance envelope. The previous generation WRX had a larger displacement 2.5-liter boxer engine that produced 265 hp.

The new WRX powertrain produces more power and torque from less displacement and also yields higher fuel efficiency than the previous WRX (manual transmission). The new WRX 2.0-liter engine also came with a new six-speed manual transmission which was a first for WRX as it previously had a five-speed manual gearbox. It also came with its first optional performance CVT automatic transmission, the Sport Lineartronic with manual mode.

Where the new 2015 WRX made substantial gains is in the fuel-mileage department. EPA-estimated fuel economy with the manual transmission is 24 mpg combined and 21/28 city/highway mpg. The outgoing 2.5-liter engine with 265 hp could only muster 19/25 mpg city/highway. The new 2.0-liter direct-injection turbo (DIT) was recognized for driver performance and also environmental performance.

Ward’s editors impressed with the 2.0-liter

Chosen from a field of 37 powertrains, Ward’s editors were impressed with the new WRX 2.0-liter’s performance. Tom Murphy, Executive Editor of WardsAuto World digital magazine said, "Subaru delivers a new rally-car hotshot, the compact WRX sedan, and the 2.0-liter turbocharged 4-cyl. Boxer under the hood makes it, as one editor says, the best yet. Some editors achieved an outstanding 28 mpg (8.4 L/100 km), and this engine pairs up perfectly with a 6-speed manual that makes rowing through gears a thrill. This fleet-footed boxer steps into the ring with fire in its eyes.”

The Subaru WRX, is a global icon and the new-generation 2015 WRX has received yet another award to add to its expanding trophy case. The 2015 WRX model’s 2.0-liter turbocharged 4-cylinder Boxer engine was named to the prestigious Ward’s 10 Best Engines list.