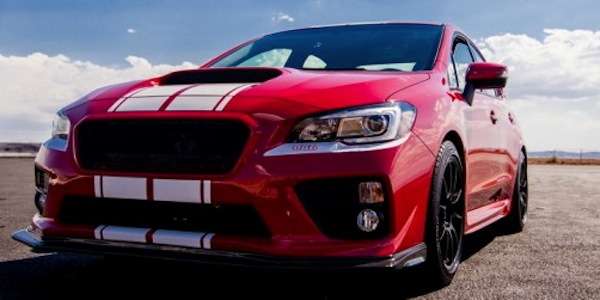 Ali Afshar has taken the 2015 Subaru WRX STI and given performance enthusiasts 2 power options. How much do you need?
Advertisement

Most buyers of the performance STI will modify their cars to get additional power and performance from the Japanese sports car. The new generation 2015 Subaru WRX STI comes with 305 horsepower and 290 lb. ft of torque from the factory, but it’s not enough for many of its owners. Performance fans have been tuning the WRX since 2002 and the WRX STI since the first STI arrived on U.S. shores in 2004.

Ali Afshar, driver and president of ESX Motorsports is a dedicated fan of Subaru and will be building 25 very exclusive 2015 WRX STIs for performance enthusiasts who desire a new-generation WRX STI “with heart pounding power complimented with breathtaking style.” It’s called the 2015 ESX STI “Red Dragon” and this is the special 10th Anniversary special edition.

Easy Street Motorsports (ESX) is located in Southern California and has been factory supported by Subaru of America since 2001. They take the popular Subaru WRX STI and tune them to get even more power and performance from the sports cars. The new ESX STI “Red Dragon” is based on the dynamic all-wheel-drive 2015 Subaru WRX STI, and the ESX enhancements accentuate its already
outstanding performance.

Why did ESX build it?

ESX wanted to give STI fans a special edition model, so they took the new-generation sports car and turned it into something very special. Ali Afshar, driver and President of ESX, Inc. says, “There are other special edition Subaru’s all over the world and not one in the U.S. So, we thought it was time we built something very special for all the enthusiasts here at home.” He says the ESX enhancements unleash the power of the Subaru Boxer 2.5 engine while maintaining safety and reliability.

ESX STI will be available in two performance power options

The 2015 Subaru WRX STI is transformed into the 2015 ESX STI and will be available in two additional horsepower ratings for 2015. One will be a street-spec model and will come with approximately 355 horsepower. ESX says the specially tuned STI will be C.A.R.B. exempt and smog legal. The second ESX STI is a Track-Spec model and will be for track-only duty and will come with approximately 425 horsepower. ESX Motorsports says this model is for “off-road” use only and will not be available in California.

ESX STI available at these dealers

The 2015 Subaru WRX STI has been a big hit all over the globe with buyers having to wait months to get the new generation model. The 2015 Ali Afshar “ Signature Series” ESX STI Special 10th Anniversary “Red Dragon” Edition will be even more exclusive and unique for STI performance fans. 2015 ESX STI mirrors the world famous Subaru/ESX race cars, and only 25 units will be produced in 2014. This is the world of ESX, “Home of the Worlds Quickest and Fastest Subarus.”