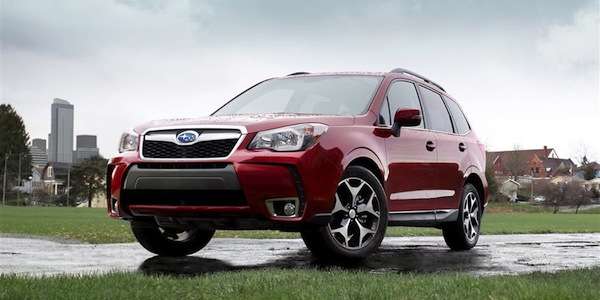 Subaru announced pricing and updates for the 2016 Forester. What new refinements do consumers get for the modest price increase?
Advertisement

The 2016 Subaru Forester SUV gets several upgrades for the new model year. New for 2016, Forester models equipped with EyeSight now include Steering-Responsive Fog Lights. This added safety feature uses the pre-aimed fog lights to individually provide enhanced illumination in the direction of a turn. 2016 Forester also gets new safety and infotainment upgrades.

The fourth generation Forester received a remodel from the ground up and the SUV had its best-ever sales in its 18 year history last month. Forester is Subaru’s top seller in the lineup for the Japanese automaker and had its best January ever. The Consumer Reports picks are mirroring what’s going on in...read more.

All 2016 Forester trim lines now feature STARLINK, Subaru’s in-vehicle platform that gives drivers entertainment services and hands-free connectivity. Owners can use their smartphones and tap into nearly unlimited entertainment with apps like Pandora, iHeartRadio Aha, and Stitcher. The technology can deliver live traffic alerts and helps reduce driver distraction by displaying texts and allowing the driver to use voice commands for music and navigation (when equipped).

The 2016 Forester 2.5i base model features STARLINK 6.2” Multimedia with a 6.2-in. single-touch gesture display. Forester Premium, Limited and Touring trims get upgraded STARLINK 7.0” Multimedia Plus with a high-resolution 7-in. LCD screen featuring multi-touch gesture controls as standard.

Toyota's First EV Will Have a Name of BZ: Toyota BZ
First Videos From Inside The Boring Company's Las Vegas Loop
END_OF_DOCUMENT_TOKEN_TO_BE_REPLACED