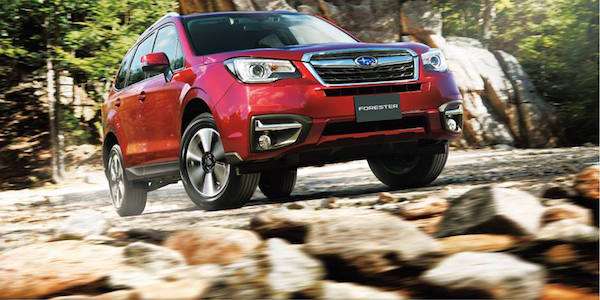 Subaru Forester scores as the “Best Compact Utility Vehicle”in the Canadian AJAC awards. What vehicles does it beat?
Advertisement

The 2017 Subaru Forester goes against the Ford Escape, Kia Sportage and Toyota RAV4 and wins the “Best Compact Utility Vehicle” in the Canadian AJAC awards announced this week. The Automobile Journalists Association of Canada (AJAC) put the vehicles through four intensive days of road tests.

The winning vehicles, in eight categories, were selected by 90 Canadian automotive journalists who gathered in October at Canadian Tire Motorsport Park (CTMP) of Clarington in Ontario for four intensive days of road tests. All cars were driven on different routes, highways, performance circuit, road circuit and all-terrain route, to simulate the range of conditions that are also experienced by consumers.

AJAC says dozens of factors are assessed like noise levels in the utility space, fuel economy, and acceleration measurements are considered and weighted. The vehicles are first classified by type and price, and all vehicle tests in each category are conducted consecutively on the same day and under the same conditions.

The 2017 Subaru Forester gets 678 total points in the scoring, while the Ford Escape came in second with 670 points, and the Kia Sportage, third place, receiving 664 points. The Toyota RAV4 came in fourth at 651 total points. Where the Forester shined was in its superior visibility, roominess/comfort/access, safety score and its excellent off-road capability.

The all-new 2017 Subaru Impreza, also a finalist, came in third place behind the Hyundai Elantra and Chevy Cruze in the “Best New Small Car” category. The 2017 Forester wins “Best Compact Utility Vehicle”, and will now go on to compete for overall Canadian Utility Vehicle of the Year honors. The winners will be announced at the Canadian International Auto Show, held in Toronto in mid-February.