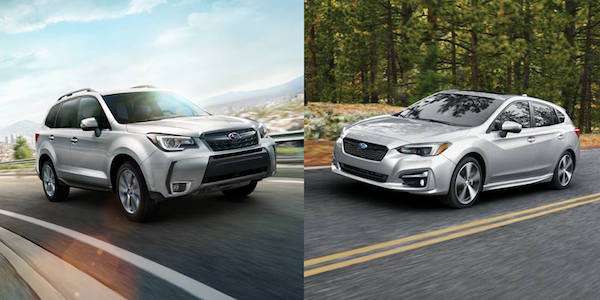 Subaru Forester vs New Impreza Who’s Best?; Both are Finalists for Coveted Canadian Utility of the Year and Car of the Year Awards

The new 2017 Subaru Impreza and 2017 Forester are nominated “Best New” vehicle in their respective segments. Can they win “Car of the Year” and "Utility of the Year" in Canada?
Advertisement

Subaru completely redesigned the new 2017 Impreza and it gets nominated for the “Best Small Car” category, going up against the Chevy Cruze and Hyundai Elantra. The 2017 Subaru Forester is a finalist in the “Best Compact Utility Vehicle” category going against the Ford Escape and Kia Sportage.

If both Forester and Impreza win their individual categories, the two Subarus will have a chance to win the coveted Canadian Utility of the Year and Car of the Year Awards. AJAC relies on thousands of data collected for the thousands of person-hours on controlled road tests of all the vehicles to come up with the winners.

The vehicles were selected by 90 Canadian automotive journalists who gathered in October at Canadian Tire Motorsport Park (CTMP) of Clarington in Ontario for four intensive days of road tests. All cars were driven on different routes, highways, performance circuit, road circuit and all-terrain route, to simulate the range of conditions that are also experienced by consumers.

AJAC says dozens of factors are assessed like noise levels in the utility space, fuel economy, and acceleration measurements are considered and weighted. The vehicles are first classified by type and price, and all vehicle tests in each category are conducted consecutively on the same day and under the same conditions.

The new 2017 Subaru Impreza has a good shot to win the “Best Small Car” category, while the 2017 Subaru Forester could also take the prize as the “Best Compact Utility”. If both win out, the two Subarus will have a chance to win the coveted 2017 Canadian Car of the Year and Utility of the Year awards. Winners will be announced in early December in Toronto and in Ontario. Stay tuned.