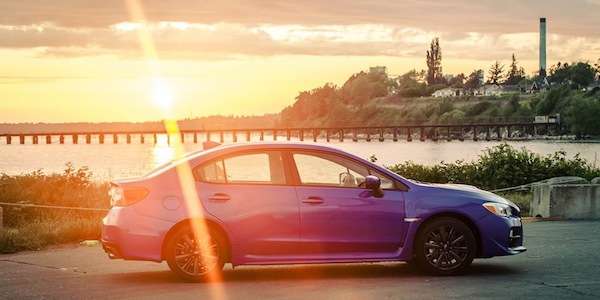 Subaru’s 2016 WRX gets mentioned as a top 3 pick for Car Guide’s Best Buy, Sports Car and Coupes under 50K. Who wins the top spot?
Advertisement

The 2016 Subaru WRX doesn’t take a back seat to many cars, but it did this week as Canada’s Car Guide announced the WRX was named second in the Best Buy, Sports Car and Coupes under $50,000 category. It takes a second place to the Volkswagen Golf GTI that’s been a huge hit with the media.

We had a chance to drive the new 2016 WRX Premium model this week and found it to be one of the best compact performance cars on the planet. But like the editors of Canada’s Car Guide found out, Volkswagens Golf GTI and Golf R hot hatches are starting to give WRX/STI a good run for the money.

The 2016 Subaru WRX is still going to be hard to beat with it’s proven Symmetrical all-wheel-drive system, new 6-speed manual gearbox and enhanced safety systems. Acceleration is awesome, handling is tight, and the ride is not too firm except over rough roads. As a daily performance driver, the 2016 Subaru WRX absolutely pegs the fun-to-drive meter.

Additionally, at the Car Guide’s announcement, The 2016 Subaru Outback wins Best Buy in the Mid-Size SUV under $50,000 category for the seventh straight year. The Subaru XV Crosstrek and Impreza were also honorable mentions in two other groupings, the Compact / Sub-Compact SUV category, as well as the Compact Car category, respectively. Check out the full review of the 2016 Subaru WRX here.

Image source: Subaru of America by way of Lucas Tanaka

Toyota's First EV Will Have a Name of BZ: Toyota BZ
First Videos From Inside The Boring Company's Las Vegas Loop
END_OF_DOCUMENT_TOKEN_TO_BE_REPLACED