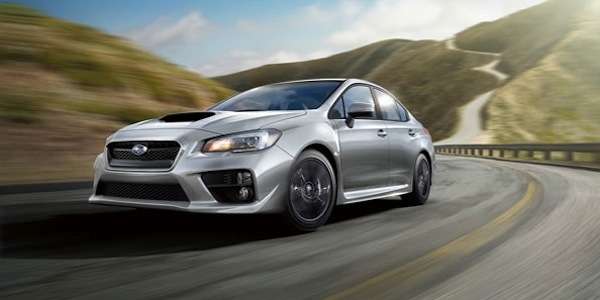 The 2016 Subaru WRX is an iconic performance car from the Japanese automaker and it gets better for the 2016 MY. Why should you choose it over the STI?
Advertisement

The 2016 Subaru WRX is arriving at U.S. Subaru dealers now and it’s the best compact performance sedan on the planet. It sits next to the more powerful WRX STI in the stable, but it could be a better choice for many performance enthusiasts looking for a car that is high on the fun-to-drive meter. This week we’’ll take a look at a World Rally Blue 2016 Subaru WRX Premium model with a 6-speed manual gearbox and see how it performs in the mountain curves.

The 2016 Subaru WRX began arriving in U.S. showrooms this summer and comes with added safety features and new infotaintment enhancements for performance fans. It is now available with Subaru’s EyeSight safety system and driver assist technology when equipped with the Sport Lineartronic automatic transmission. Lane Keep Assist has now been added to the 2016 WRX EyeSight system which uses the vehicle’s electric power steering system to help the driver keep the vehicle within its lane when driving on the highway.

Features and options of 2016 Subaru WRX

The flat-bottomed steering wheel is the first thing that catches your eye when you climb into the WRX cabin. The manual sport seats are covered in a grippy fabric, and are so attractive that the optional leather isn’t really necessary. The cabin feels roomy and WRX has a one-inch longer wheelbase than the previous WRX. Rear seat passengers gain nearly two inches of legroom and we didn’t hear any complaints from the two big guys riding in the back as we were going to lunch this week.

The cabin feels upscale with plenty of soft-touch materials throughout, and WRX comes with the sport front seats with wrap-around support, and the high-grip fabric kept us planted in the seat during spirited driving this week. We liked the small cowl in the center of the dash that housed the boost gauge and climate control. It’s easy to read and keeps your focus up and eyes on the road.

There’s a fair amount of road and wind noise inside, which is typical in this segment but the harmon/kardon 9-speaker premium sound system works well to keep it covered up. Cargo carrying ability is good for a compact sedan with the 12 cubic feet trunk being able to open to the cabin over the fold-down rear seats. Many fans still miss the WRX hatchback model which was dropped last year for the new model change. STI also only comes in sedan body style.

WRX is powered by a 2.0-liter FA turbocharged engine that produces 268hp and 258 lb-ft of torque over a very broad range, from 2000 rpm to 5200 rpm. This is another difference between WRX and the WRX STI, the STI’s 2.5-liter EJ 305hp powerplant. Subaru says WRX will sprint from 0-to-60 in 5.4 seconds, where the STI is just a couple tenths faster from 0-60 at 5.2 seconds. WRX gets an EPA estimated 20/27 city/highway mpg and 23 combined mpg. WRX does get better fuel mileage compared to STI’s 17/23 city/highway. The WRX does need premium unleaded fuel for optimum performance.

Under the hood, WRX comes with the 2.0-liter turbo boxer that replaces the outgoing 2.5-liter powerplant that’s still used in the STI. This new engine that was adapted from the Forester 2.0XT, produces 268 horsepower and 258 lb. ft of torque. This is a 3 hp bump from the larger H-4 2014 engine. This tester came with the new six-speed manual gearbox that replaced the old five-speed. The WRX now matches the STI with the same smooth-shifting 6-speed manual gearbox. Upgrades include carbon synchronizers for first and second gears and a cable-shift linkage for smoother gear shifts during both upshifts and downshifts. The difference is noticeable.

From the very first drive, we could feel the difference immediately with its wider ratio spread over the previous generation five-speed. We drove the WRX over a number of different roads in the mountains west of Denver and gave this WR Blue WRX Premium a thorough test. The new six-speed is a joy to shift and Subaru upgraded the driveability on the highway considerably with the extra gear. The performance sedan performed better than expected on a twisty canyon road just out of Denver leading up to Evergreen. The road is as close to being on a race circuit without actually being on one and an ideal place we like to test performance vehicles.

We powered through the tight turns on the two-lane canyon road like the car was on rails, and the combination of the 2.0-liter turbo engine, upgraded suspension and 6-speed gearbox, the performance sedan proved to be just as advertised by Subaru. The handling and balance of the WRX felt tight and more precise as we exited the corners at speeds that were 20 mph over the posted speed limit. The 2.0-liter turbo powerplant has plenty of power to get you in trouble and 268 hp is more than enough for most performance minded buyers.

With the sport tuned suspension, 245/40 R18 summer performance tires and the stiffer chassis, it gives any driver confidence in the WRX’s abilities at high speeds in the corners. This performance compact has the driving dynamics of much more expensive sports cars. The new Electronic Power Steering system combined with the Continuous AWD version of Symmetrical All-Wheel Drive worked flawlessly in the curves.

On the open road, the new gear ratios are a perfect match one through five, and six gear is great on the highway at speeds above 70 mph. Even at highway speeds in fifth gear, there is plenty of pedal left at 80 mph. Downshifting into six gear, this sports sedan will go as fast as you want to go. We don’t have enough open road where we tested the WRX and weren’t able to test its high end capabilities.

One downside we could see with the WRX is in the cabin’s noise level from outside wind and road noise. The new WRX is not much different from the previous generation performance model even though Subaru says additional sound insulation has been added to the fourth-generation model. There is still a fair amount of road and wind noise at high speeds.

3 reasons to choose the Subaru WRX over the WRX STI

WRX is incredibly agile in the corners, is priced $5,235 less to a comparably equipped STI, and WRX now comes with a standard 6-speed manual gearbox like the STI. After a week in both the new-generation WRX and WRX STI, we would recommend the 2016 Subaru WRX over the rally-ready WRX STI. The average buyer who isn’t going to take his performance sedan to the track or rally course will be perfectly happy with the performance in the new-generation WRX.

The STI has 37 additional horsepower, a limited slip differential, performance vs. sport suspension, Brembo brakes and a slightly quicker steering ratio (13:0:1 vs. WRX’s 14:4:1), WRX has a slightly tighter turning circle (35.4 ft. vs. STI’s 36.0 ft. The STI is a true rally machine and ideally suited for the track and rally course. WRX is also a strong performer on the track, and most performance enthusiasts will add their own modifications for street-only use. The 2.0-liter FA powerplant is ideal for upgrading with additional power if you want it.

The firmness of the ride in the STI gets kicked up a few notches above the WRX and this pushes the limits for many performance drivers. STI does come with more power and superior cornering ability, but it does come at a cost in ride comfort. As a daily performance driver, WRX offers a bit more civility that driving enthusiasts will appreciate especially if its being driven on a daily basis. WRX’s all-wheel-drive system provides superior handling on dry and wet roads. It’s got the enhanced 6-speed manual gearbox, acceleration is awesome, handling is tight, and the ride is not too firm except over rough roads. As a daily performance driver, the 2016 Subaru WRX absolutely pegs the fun-to-drive meter. Get the iconic WR Blue and you have the Subaru rally heritage right along with it.