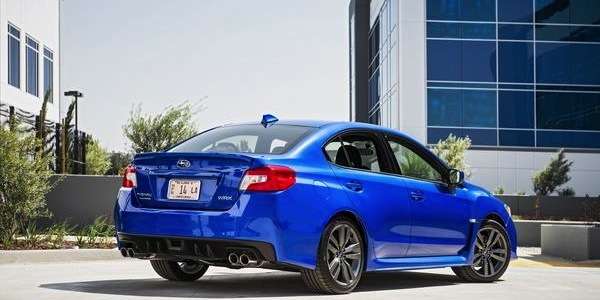 The new 2016 Subaru WRX launches this summer and it will be even safer. What makes the performance sedan safer than the outgoing model?
Advertisement

Subaru will feature the new-generation EyeSight safety system on the 2016 WRX for the first time here in the U.S. Up until now, it’s only been available on the new Legacy sedan and Outback Wagon. Subaru did launch the 2015 WRX S4 in Japan with the advanced prevention crash system and it now comes on the U.S. spec 2016 performance sedan.

Subaru’s EyeSight safety system and driver assist technology is now available on WRX when equipped with the Sport Lineartronic automatic transmission. Lane Keep Assist has now been added to the 2016 WRX EyeSight system which uses the vehicle’s electric power steering system to help the driver keep the vehicle within its lane when driving on the highway.

The 2016 Subaru WRX and WRX STI will begin arriving in U.S. showrooms this summer and will come with added safety features and new infotaintment for performance fans. There have been no changes to the...read more.

This system is one of the best safety systems of any automaker and was rated the highest of any system and excels in crash avoidance. EyeSight uses two charge-coupled device (CCD) cameras mounted inside the car on the upper edge of the windshield. The EyeSight system processes stereo images to identify the vehicles traveling in front, as well as obstacles, traffic lanes and other items. The video information is relayed to the EyeSight computer, which is also networked with the car's braking system and electronic throttle control.

EyeSight will bring WRX to a complete stop

Below speeds of approximately 19 mph, EyeSight is capable of detecting pedestrians in the WRX’s path and can activate to mitigate or even avoid the collision. Under certain circumstances, EyeSight is able to bring the car to a complete stop, thus avoiding a collision.

The new generation Subaru WRX is a IIHS Top Safety Pick for the first time. Last year, WRX had been rated a top pick, and then in May, IIHS gave the 2015 WRX/STI the award for good performance in each of the Institute’s crashworthiness evaluations, including the small overlap front test. This is the first time IIHS has rated the WRX and WRX STI, and both came through the test with flying colors.

This is a result of Subaru engineers improving the already effective ring-shaped reinforcement frame used in all Subaru vehicles. Subaru's ring-shaped reinforcement frame has been used for more than a decade and has proven very effective. The 2015 WRX/STI was enhanced even more to provide better protection in the structure increasing cabin rigidity and absorbing impact energy from any direction. This is the design that gives the superior protection that enables all their vehicles to keep achieving these safety awards year after year.

Other safety features on 2016 WRX

The new generation 2016 WRX also gets a driver’s knee airbag, reversing camera and better visibility, with wing mirrors located on the doors, reducing blind-spots. All this safety equipment combined with EyeSight helps the 2016 WRX maintain Subaru’s commitment to become the number one automaker in overall vehicle safety. The 2016 Subaru WRX is one of the safest performance compact sedans on the planet.

Parks McCants wrote on April 30, 2015 - 9:19pm Permalink
I believe that every safety feature in this article already exists on current and near-future Honda, Acura light trucks and cars. Am i missing something here?
Bob wrote on May 20, 2015 - 3:00am Permalink
What performance compact does Honda make? Pretty sure they only make people movers.