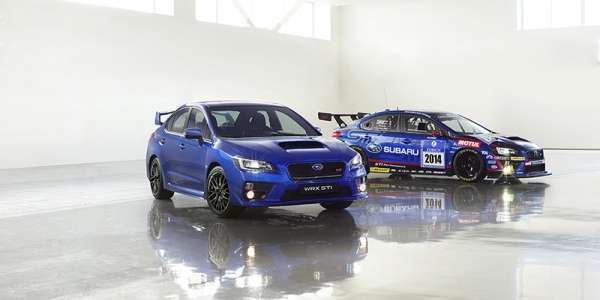 The all-new 2015 Subaru WRX STI Nurburgring race car is based on the WRX STI production car, or is it really the other way around? The race-bred version of the WRX STI has been developed to contest the annual Nurburging 24-Hour Race in June, appeared on Subaru’s stand at the Geneva Motor Show next to the production version. This modified version of the showroom car will be seeking its third successive class win at the notoriously demanding race circuit in Germany’s Eifel Mountains.

Subaru is involved in a number of racing ventures around the globe, but non is more grueling or demanding on the car than the Nurburgring 24-Hour Race. The WRX STI NBR race car has to take on corner after corner during the race and the STI has to provide extreme handling response and “the highest levels of trust” for the driver.

This is where Subaru takes what they’ve learned in this race and applied it to their production cars, making them more engaging and “confidence-inspiring.” Subaru will take what they learn from this years Nurburgring 24-hr race and continue the process as they begin to compete with the race version of the all-new 2015 WRX STI. Subaru says their fans can expect more victories, and an even deeper connection to the driving experience in the future.

Subaru and their motor sports subsidiary, Subaru Tecnica International (STI), will enter the Nurburgring 24-Hour Race for the seventh consecutive year. Fuji Heavy Industries, the parent company of Subaru, reinforced collaboration with STI to create an innovative and more competitive race car based on the new 2015 Subaru WRX STI.

The Nurburgring 24-Hour Race demands that its performance vehicles have speed, stability and reliability. By aiming for a victory in its class for the third time following its last win in 2012, Subaru will prove the engineering experience from racing that underpins its brand value. It’s much more than just about winning a race. It’s about learning how to make the 2015 Subaru WRX STI even better for its performance enthusiasts.