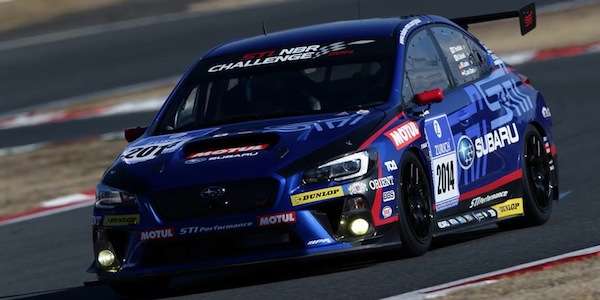 Subaru brought the all-new 2015 WRX STI and the WRX STI NBR racecar to Laguna Seca. Watch both as they take on the famous racetrack.
Advertisement

Laguna Seca is the ideal place for Subaru and STI to demonstrate the capabilities of the new 2015 Subaru WRX STI and the 2015 WRX STI NBR racecar. They brought both to Mazda Raceway Laguna Seca near San Francisco, California to test their abilities. They brought their professional drivers along to drive the specially prepared Nurburgring 24-Hour racecar, and let journalists test drive the new production performance 2015 WRX STI.

Subaru Technica International (STI), the performance and racing division of Subaru, has to be one of the most fan-friendly automakers in the world. Subaru’s Masuo Takatsu, who is the WRX STI’s Project General Manager, is more like their enthusiast fans than we can imagine. He has been involved with the development of the STI from the beginning. But Subaru and STI are involved in racing for a very specific purpose.

The all-new specially prepared 2015 Subaru WRX STI NBR race car will challenge for the Nurburgring 24-Hour Race later this year in Germany. But why does Subaru do it? They develop the technology on the track and then transfer it to the production STI fans drive on the road. The 2015 WRX STI takes its motorsports pedigree to the road.

Subaru has been involved in Rally racing for decades and they have won the World Rally Championship with the WRX STI three times. Subaru expanded the WRX STI's competition purview to include long distance road racing. While many brands tout performance-car development on Germany's Nurburgring racetrack, Subaru won the SP3T class in the track's grueling 24-hour race in 2011 and 2012 and took second place in 2013 in the WRX STI.

A specially prepared 2015 WRX STI NBR will compete in the 2014 race that will take place from June 19-22 in Germany. The Nurburgring is well known as “the ultimate public road” since it has more than 170 corners with rough road surface and 984 feet of elevation change from its lowest to highest points.

Laguna Seca is the next testing ground for the WRX STI before it heads to Switzerland for the 84th Geneva International Auto Salon next week. Laguna Seca is a paved racing track in central California used for major races such as Moto GP and the American Le Mans Series. The 2.24 mile mid-to-low-speed track features many technical corners along with its infamous “Corkscrew”, a steep downhill S turn with a 49 foot difference in height.

Subaru has already used the racing technology from STI’s motorsports activities and transferred it to the production 2015 WRX STI. The performance car gets a completely “remastered track-tuned suspension, a tighter steering ratio and still comes with a 305 horsepower turbocharged boxer engine. Subaru chose not to bump up the horsepower in the new-generation STI. It keeps the same 2.5-liter powerplant, but gets substantial upgrades underneath to improve handling and performance.

As Subaru and STI take the new 2015 WRX STI specially prepared Nurburgring 24-Hour racecar to Germany, they will be continually developing new technology that will be used on future WRX STI performance cars.