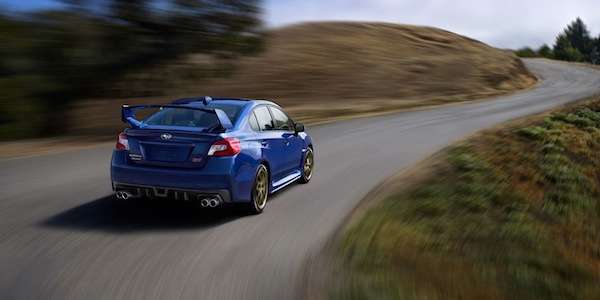 MotorWeek takes on the twisting canyon roads of California and the world-famous Laguna Seca Raceway with the all-new 2015 Subaru WRX STI.
Advertisement

Greg Carloss of MotorWeek took the all-new 2015 Subaru WRX STI and stretched its legs at Laguna Seca Raceway. This took place at Mazda Raceway Laguna Seca near San Francisco, California. How did the newest performance car from Subaru perform?

Subaru brought the all-new 2015 Subaru WRX STI performance car to Laguna Seca Raceway for a media event to let journalists take the newest performance car out on the track. They also tested the 2015 STI on twisty canyon roads around Carmel, California. It’s the ideal place to test out the rally-bred WRX STI.

Here’s MotorWeeks impression of the new STI. Carloss says that while most current STI owners won’t want to believe him, he says “the new 2015 STI is very good and in fact it’s the best STI ever built by Subaru.” And after driving the new performance car, he can see why Subaru can say that.

He went on to praise the new hydraulic steering with quicker ratio and says it makes a huge difference offering the driver greater feel and response. He also liked the new stiffer suspension out on the Laguna Seca track where he said the grip of the new STI was unbelievable, and said the grip “would last for days, maybe even month’s.”

Laguna Seca is a great place for Subaru to demonstrate the capabilities of the new 2015 WRX STI. Laguna Seca is a paved racing track in central California used for major races such as Moto GP and the American Le Mans Series. The 2.24 mile mid-to-low-speed track features many technical corners along with its infamous “Corkscrew”, a steep downhill S turn with a 49 foot difference in height.

Carloss took the STI through the famous Laguna Seca Corkscrew at full speeds and was impressed with the new performance cars Vehicle Dynamics control, Torque Vectoring and the driver controlled center differential where you can dial in more or less traction as the driver see’s fit. In the video below, you can see how well the STI navigates the tight S curves at full speeds.

Carloss brings up a sore subject with WRX / STI fans that Subaru will only offer the WRX and WRX STI in a sedan body style. According to Subaru, the outgoing hatchback only accounted for 1/3 of the STI sales. But it was likely dropped to make more room on the production line for other models because of Subaru’s stellar growth. We’ll likely see the 5-door hatch STI return by 2017 after the Indiana plant expansion is completed.

2015 WRX STI Launch Editions will also be available. There will only be 1000 examples of the special 2015 Launch Edition and it will include all the base WRX STI features but adds a few key touches. On the outside, all Launch Editions will all be painted WR Blue Pearl and come equipped with gold-painted 18-inch BBS alloy wheels. This is an iconic color combination long associated with Subaru competition cars. As on all 2015 WRX STI models, the wheels are wrapped in 245/40R18 summer performance tires on all four corners.

Subaru took the opportunity to show off the all-new 2015 Subaru WRX STI NBR race car that will challenge for the Nurburgring 24-Hour Race later this year in Germany. At the event, Subaru Technica International (STI), the performance division of Subaru, also presented the history of Subaru and STI's challenge in the Nurburgring 24-Hour Race over the past 6 consecutive years to the U.S. media. The event also included demonstration drives of the 2015 WRX STI NBR Challenge car 2014 on the track at full speeds.

MotorWeek was thoroughly impressed with the all-new 2015 Subaru WRX STI at the Laguna Seca Raceway and on the twisty canyon roads around Carmel, California.