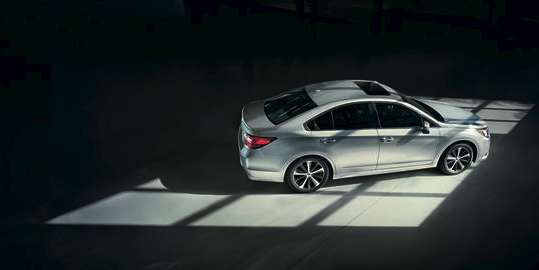 The all-new-2015 Subaru Legacy sedan will come with a higher price, along with higher mileage and hp.
Advertisement

In the case of the newly redesigned 2015 Subaru Legacy sedan, the higher cost is a good thing because of what it brings to the new Legacy for 2015. The new 2015 Legacy now comes standard with a Lineartronic Continuously Variable Transmission (CVT) automatic that increases fuel mileage. Gone is the five speed auto and five speed standard transmissions. But Legacy also gets more horsepower and gets sportier with standard manual mode with steering wheel paddle shifters. How much was the bump in price for 2015?

The 2015 Subaru Legacy 2.5i has a starting price of $21,695 (plus $795 destination) which is less than a 2 percent cost increase compared to the outgoing model. And the base 2.5i comes with additional standard equipment and safety features for that price. It comes with the 2.5-liter Boxer engine with and an increase of 2 hp to 175. But it also gets better fuel economy of 26 city/36 highway mpg. That an impressive 4 mpg bump from the outgoing model. And Subaru achieves that with standard all-wheel-drive. Subaru says they added an Active Grille Shutter system that helps to improve fuel economy by reducing wind resistance and is standard on 4-cylinder models.

Legacy 3.6R Limited now comes with a new High-Torque Continuously Variable Transmission that develops 256-horsepower with the 3.6 liter, 6-cylinder Boxer engine. Fuel mileage improves to an EPA estimated 20 city/29 highway/23 combined mpg. All Subaru Legacy’s will be built here in the U.S. at the Subaru plant in Indiana, Subaru of Indiana Automotive (SIA).

The new Legacy sedan comes with a higher price, along with higher mileage and more horsepower. Look for the all-newly redesigned 2015 Subaru Legacy to begin arriving into showrooms this summer. Legacy also comes with new standard features. Stay tuned to Torque News for a complete list of features and options on 2015 Legacy.

Other 2015 Subaru Legacy stories of interest.
Subaru drops two significant fixtures on 2015 Legacy to get 36 mpg