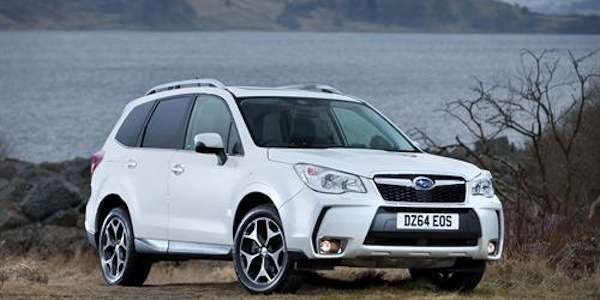 2015 Subaru Forester XT turbo is sought after in the UK

The 2015 Subaru Forester is named Best Family 4X4 by Motors North in the UK.
Advertisement

The new Subaru Forester keeps piling up awards around the globe and has again been named ‘Best Family 4x4 of the Year’ by Motors North in its Highland Car of the Year Awards. It’s not the first time Forester has been honored in the UK, as the multi-purpose SUV took home the same award in 2014. The previous year in 2013, UK’s 4x4 Magazine also crowned the Forester as its “Mid-size SUV of the Year.”

The new-generation Subaru Forester was introduced in the UK in May 2013 and saw improvements in the areas of performance, safety features and a more spacious and better appointed interior. Motors North said: “A firm Highland favorite and previous winner in the category, the Forester is growing more refined and desirable as time passes and offers excellent value for money in a spacious, comfortable package.”

Forester XT is popular in the UK

Subaru offers a gasoline turbo Forester in the form of the XT Turbo and which has proved popular with Subaru buyers in the UK. Like it’s U.S. counterpart, it come powered by a 2.0-liter turbocharged direct-injection boxer engine. The UK model produces 240ps (236hp) and 350Nm of torque. It comes mated to a Lineartronic CVT automatic transmission and will launch from 0-62 mph in 7.5 seconds with a top speed of 137 mph.

Unlike U.S. models, Forester can be ordered with a 2.0-liter turbo diesel engine that provides even better fuel efficiency (49.6 mpg combined) and 350Nm of low-end torque to get the SUV moving. The Forester 2.0-liter diesel is mated to a 6-speed manual gearbox.

The 2015 Subaru Forester gets the nod again and is named Best Family 4X4 by Motors North in the UK. The Forester XT performance model is unusual in this segment and will continue to be popular with UK buyers.

Elon Makes a Cybertruck Statement With an Action, But Quiet in Words
Tesla's Record Month in China: Doubled Registrations in March 2021
END_OF_DOCUMENT_TOKEN_TO_BE_REPLACED