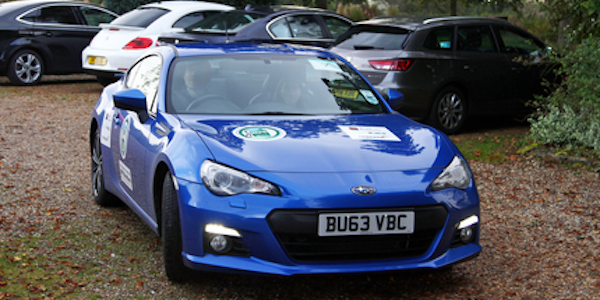 The 2015 Subaru BRZ sports coupe participates in the MPG Marathon 2014 and finished second. See what surprised the judges.
Advertisement

The lightweight 2015 Subaru BRZ should get good fuel mileage, but what happened at the MPG Marathon surprised the judges. The lightweight BRZ weighs in at 2762 lbs. and gets 36.2 mpg on the European cycle which is good for a driving enthusiasts sports car. The new Subaru BRZ has surprised judges of the MPG Marathon 2014 in the UK by finishing second in the “Percentage Improvement” category.

The rear wheel drive sports coupe proves it is both fun and frugal. Subaru BRZ ranked second in the Percentage Improvement category in the MPG Marathon 2014 and achieves 55.42 mpg, an improvement of 53.1 percent over official fuel consumption figures. This surprised and impressed the judges at the UK event. The Ford Fiesta ST-3 1.6 EcoBoost SCTi came in first, the Ford Focus ST-3 2.0T finished in third place.

What is MPG Marathon?

Now in its 14th year, MPG Marathon is a two day event organized by Fleet World magazine in the UK, and is a live demonstration of how both car and driver can make a massive difference to fuel costs and emissions. The MPG Marathon is a 330-mile route that starts near Cirencester and heads out into the Brecon Beacons in Wales on the first day. The drivers then head to Andover and Bath on day two. Contestants are allowed to plan their own routes, providing they included a number of pre-agreed fixed points, making keen navigational skills an important aspect of the competition.

BRZ proves to be frugal

The 2015 Subaru BRZ was piloted by automotive journalist Richard Aucock and co-driver Katie Beck. The two were able to achieve an impressive 55.42mpg over the 330 mile route in the BRZ. This was an improvement of 53.1 percent over the official European combined fuel economy cycle. In doing so, the pair picked up second place in the Percentage Improvement Class. Of course the team uses fuel-saving techniques to get this kind of massive improvement in fuel mileage. This is a competition and the MPG Marathon result is 25.7 percent higher than the car’s official extra-urban fuel consumption rating.

The 2015 Subaru BRZ came with a six-speed manual transmission and the stock 200 horsepower Boxer engine. BRZ is known for its low center of gravity and excellent handling characteristics on the road. The six-speed manual has a relatively long top gear ratio (0.767) that enables BRZ to achieve impressive fuel economy at a cruise in normal driving situations. Subaru uses separate cooling circuits for the aluminum cylinder block and cylinder head allowing the engine to warm-up faster, reducing friction and aiding fuel efficiency.

Spiraling fuel costs have made economy one of the most desirable factors for consumers when they are choosing a new car. Sporty driving dynamics are also tops on the list. The 2015 Subaru BRZ sports coupe provides both at an affordable price. The sports coupe achieves an impressive 55.42 mpg during this 330-mile contest, an improvement of 53.1 percent over official fuel consumption figures. It definitely surprised the judges.