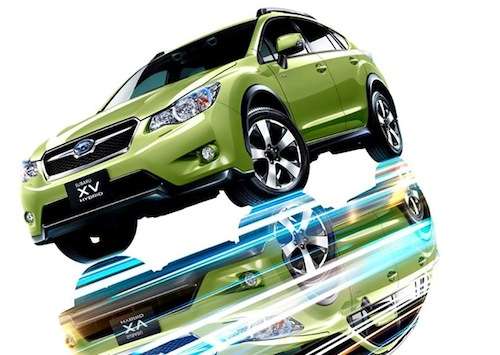 2014 Subaru XV Crosstrek Hybrid is released in Japan and here are three new facts you didn’t know about the first hybrid from Subaru.
Advertisement

Subaru launches their first ever hybrid model and it comes with fuel-saving technology and newly released features that set it apart from the standard XV model. What we did know was that the new 2014 XV Hybrid will feature Subaru’s excellent Symmetrical all-wheel-drive system and 8.7 inches of ground clearance for off-road capability. We didn’t know the new hybrid model will get a few new features for the chassis, exterior and hybrid system to enhance driving dynamics and ride quality.

The new 2014 XV hybrid goes on sale now in Japan first before it’s launched around the globe later this year. The brands first-ever hybrid will feature Subaru’s distinctive driving experience and combine it with the fuel-sipping hybrid technology they developed in house. It uses a 2.0-liter Horizontally-Opposed 4-cylinder gasoline engine that was partially modified for the hybrid model, including reduction in engine friction. The configuration of the hybrid system and battery along with the low center of gravity and superior weight balance should deliver superb driveability and handling on-or-off -road.

By using a motor assist function for the engine output, enhanced fuel economy has been achieved. Subaru says the new 2014 XV Crosstrek Hybrid model will achieve 20.0km/liter (47 mpg) from the Japanese JC08 test cycle that was conducted for the new XV Hybrid (19.0km/liter in case that vehicle weight is 1,540kg). This test cycle is is expected to be more “real-world” and meets Japans new more demanding 2015 Fuel Economy Standards ahead of time.

What is new information for the hybrid XV, is the chassis performance and body rigidity have been enhanced to improve ride quality, lower the noise level and improve handling. Subaru engineers refined chassis performance and body rigidity by adapting a new friction control damper for front and rear suspension. Subaru says it It absorbs any road surface irregularities to enhance ride quality. The quick steering gear ratio also enables sharper handling response and a secure feeling. An extra layer of noise insulation absorbing materials have been added to reduce the new hybrid vehicle's unique noise. And a large floor undercover has been adopted forf better aerodynamic performance.

A new "Eco-Cruise Control" function was developed exclusively for the hybrid model. It is coupled with models utilizing the "EyeSight" driving assist system. Fuel economy is enhanced while the EyeSight's "Adaptive Cruise Control with all-speed range tracking function" and is operated by utilizing EV driving maximally. The multi-function display shows the hybrid system's energy flow according to the driving condition such as engine / motor operation and battery recharging by brake regeneration.

The exterior and interior also get a few exclusive treatments to set it apart. To spotlight the hybrids environmental character, a new "Plasma Green Pearl" exterior color exclusive for the hybrid model has been added. Also the XV hybrid will feature new aluminum wheels which will have “superior aerodynamic performance and enhanced rigidity for stability.”

New head lamps will also be exclusive for the hybrid model. They will feature a clear blue inner lens and white bulb for the front lamps and clear combination lamps in the rear. This will be exclusive to the Japan spec models only. The interior gets an exclusive instrument cluster that uses gradations of the blue color scheme that “creates a sense of depth and advanced character.” The XV hybrid will also feature a two-tone silver and black Alcantara trim to enhance the quality and feel of the cabin.

With the unique features that are designed into the all-new 2014 Subaru XV Crosstrek Hybrid, ride quality, noise reduction, superior fuel mileage and visual enhancements have been achieved. The new hybrid is available in Japan now, look for it to arrive in U.S. showrooms in the fourth quarter of 2013.