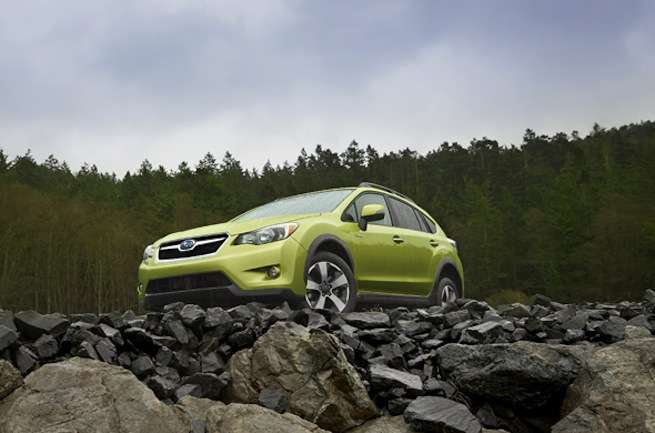 Subaru announces the all-new 2014 XV Crosstrek Hybrid will be launching in North American in November.
Advertisement

Subaru seems to be pushing all the right buttons with buyers around the globe and their first-ever hybrid is already a success. Subaru will be launching the all-new 2014 XV Crosstrek Hybrid in North American and it’s already a hit before it arrives on U.S. shores. Subaru will likely have to increase production in Japan of their first-ever hybrid model. The new XV Crosstrek hybrid is just about to launch here in North America, and the new all-wheel-drive hybrid is exceeding Subaru’s sales targets.

According to Edmunds, the initial sales target of 550 units was blown away by the 5,850 orders they received within two weeks of the Crosstrek Hybrid's unveiling in Japan. And buyers have responded well to the standard XV Crosstrek too. Subaru sold 3,536 Crosstrek units in September, compared to 192 from the same time period last year. Subaru is making a lot of very good decisions and buyers are responding.

And the new Subaru XV hybrid won’t have much competition. The all-wheel-drive hybrid segment is extremely small with Toyota bringing the only hybrid all-wheel-drive variant in the Highlander. The Toyota model is much bigger and also has a heftier price tag of $40,170. The XV Crosstrek hybrid will have a starting MSRP of just $25,995 (plus $825 destination) making it a great value for sport-minded consumers.

Subaru is attracting new buyers to the brand like never before and the XV Hybrid will likely bring new green customers into Subaru showrooms who have never purchased a Subaru vehicle before. This segment is wide open and Subaru will have a corner on the market until other automakers bring out new all-wheel-drive hybrid models.

What does the new XV Crosstrek hybrid have to offer? It starts will great fuel-mileage. Subaru uses a motor assist function for the engine output, that enhances fuel economy. Subaru says the new 2014 XV Crosstrek Hybrid model will achieve 20.0km/liter (47 mpg) from the Japanese JC08 test cycle that was conducted for the new XV Hybrid (19.0km/liter in case that vehicle weight is 1,540kg). This test cycle is is expected to be more “real-world” and meets Japans new more demanding 2015 Fuel Economy Standards ahead of time.

The new 2014 XV Hybrid will also feature Subaru’s excellent Symmetrical all-wheel-drive system and 8.7 inches of ground clearance for off-road capability. This will appeal to millennial buyers who are looking to use the crossover for recreational activities on the weekends. Subaru knows their current loyal customers and is appealing to new buyers with the new fuel-sipping technology.

The new hybrid arrives in the U.S. and Canada this November at a time when Subaru sales are reaching new heights. The new 2014 Subaru XV Crosstrek hybrid is already a resounding win in 2013 and should help Subaru achieve even greater sales in 2014.