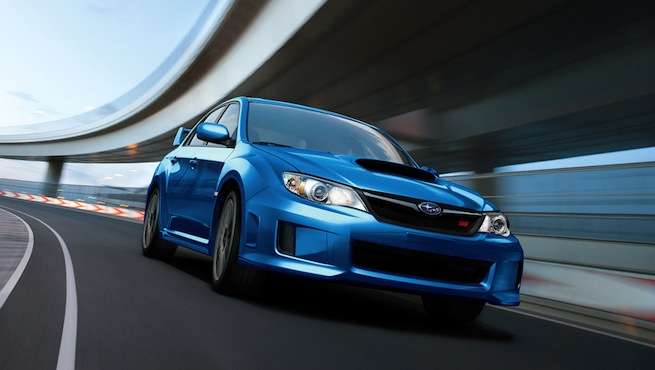 The 2014 Subaru WRX STI Tsurugi Edition is a new sophisticated addition to the lineup that features a new refined look for the performance enthusiast.
Advertisement

New for the 2014 Subaru WRX STI, Subaru introduces a new sophisticated Tsurugi Edition trim level to the high-performance model with a more refined look. Tsurugi (pronounced TSUE-roo-ghee) is named for a traditional Japanese two-sided broadsword. This new Tsurugi Edition trim features first-ever styling for the WRX STI and is exclusive to Canadian market cars. Its geared toward the more discerning sports car enthusiast.

But inside and out, Tsurugi Edition gets major enhancements to both the performance esthetics and styling of the WRX STI. Think of the new trim level as the “executive edition” of the WRX STI lineup. It offers a sophistication never before offered on the Subaru WRX STI.

Outside, Tsurugi Edition features 18-inch Enkei cast alloy wheels with a distinctive five-split-spoke design, multi-reflector halogen fog lights, Xenon high-intensity discharge (HID) headlights and mirror-integrated LED turn signals. The rear spoiler has been removed but an exclusively designed front lip spoiler has been added. This has been added to improve airflow passing below the front bumper to generate downforce and improve stability at high speeds.

Inside is where the Tsurugi Edition gets more luxury than ever before offered on the performance WRX STI. The new trim features a power sunroof, automatic climate control, auto-dimming mirror, and SIRIUS XM Radio as well as a Kicker 10-inch subwoofer for enhanced sound.

This new edition gets a never before offered interior for the WRX STI lineup that definitely moves it up into executive status. This special edition introduces leather seating surfaces for the first time for the discerning driver. It will also feature a leather-wrapped tilt/telescoping steering wheel embossed with the STI logo in its center and leather-wrapped gear selector. Performance-design front seats integrate the backrest and head restraint into a single structure and are heated for added comfort in colder temperatures.

The Canadian 2014 Subaru WRX STI Tsurugi Edition models will be easily identifiable by unique badging, exclusive to this trim level. Pricing starts at 41,495 Canadian. We will have to wait for the 2015 WRX STI to see the new-generation performance model. Stay tuned.