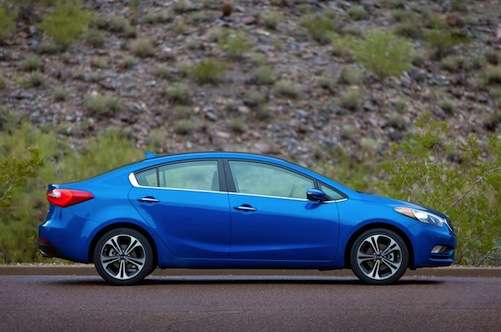 The all-new 2014 Kia Forte will come with the lowest base price in the compact car sedan segment, will feature cutting-edge technologies, and a new 5-door hot hatch is coming.
Advertisement

Kia Motors under the guidance of chief design officer Peter Schreyer, is one of the globes fastest growing automakers. They offer cutting-edge technologies, premium amenities, affordable pricing and the lowest cost of ownership in the industry. Kia has announced the launch of the newly redesigned 2014 Kia Forte and it will come with the lowest base price in the compact car segment with a starting price of $15,900, plus $800 destination.

The new 2014 Forte starred in Kia’s popular “Hot Bots” Super Bowl ad this January, and represents one of the best small car values on the road. Kia has been known for value, and now they are beginning to be known for some cutting-edge technologies on their cars. The all-new compact sedan is packed with new technologies for younger buyers, including Kia’s next-generation UVO in-vehicle infotainment and telematics system with eServices.

The 2014 Forte Sedan has received a total makeover and is now bigger and sportier than the outgoing model. It has new European styling that will appeal to a new buyer that Kia is trying to attract. And with an MSRP of $15,900, it looks like they hit their mark. The Forte competes in the very competitive compact segment and gets a new exterior sporty profile, two new powertrains, and greater interior space that should help it stand out.

The 2014 Forte is offered in three models:  LX with a 1.8-liter engine and manual transmission starting at $15,900; LX with a 1.8-liter engine and automatic transmission with a base price of $17,400; and EX with a 2.0-liter GDI powerplant and automatic transmission beginning at $19,400.  Destination charge for all three models is an additional $800. The more powerful 2.0-liter 173-horsepower GDI model offers fuel economy of 24 miles per gallon city/36 highway/28 combined.

Two trim levels to choose from

The all-new 2014 Forte arrives with upscale amenities and rides on an all new chassis. And it comes with features not expected in this price range and segment. The base LX model comes standard with steering wheel-mounted audio controls, SiriusXM Satellite Radio3, Bluetooth, and heated power-folding mirrors. The optional Popular Package (LX A/T only) adds 16-inch alloy wheels, cruise control, keyless entry with remote trunk release and a sliding front armrest.

Also look for Kia to roll out a new 2014 Forte 5-door hot hatch with a new turbocharged engine. The European-inspired hatchback SX is powered by an all-new 1.6-liter gasoline direct-injected (GDI) turbocharged four-cylinder engine putting out 201 horsepower and 195 lb.-ft. of torque. When its compared with the competition, it should be the fastest compact in North America. Pricing has not been announced on the new Forte 5-door. The combined sportiness of the SX with the useful hatcback, along with the new Sedan, should give Kia a “duel-threat” in the compact car segment.

The new Forte is lower, longer and wider and offers a sportier and more upscale design for global buyers. It comes with a new engine with better performance, greater interior space and a wider array of premium amenities than the outgoing model. Look for the all-new 2014 Kia Forte Sedan to go on sale within the next 30 days. The new 2014 5-door hatch is expected to go on sale in the third quarter of 2013 here in the U.S.