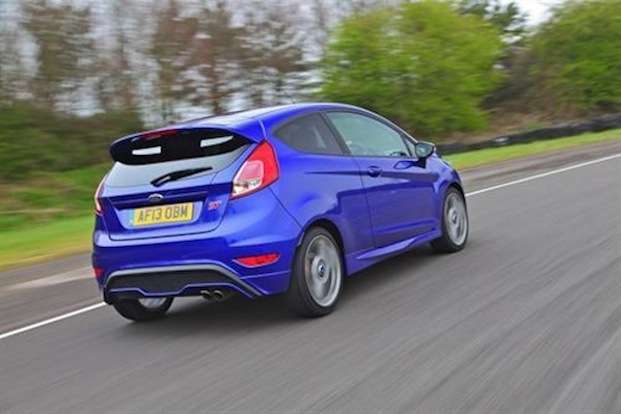 Ford is having to increase production for the 2014 Fiesta ST in Europe as it can’t keep up with demand for the hot hatch.
Advertisement

The 2014 Ford Fiesta is a hot hatch in Europe and Ford can’t keep with demand for the sporty compact. It’s a good problem when demand outpaces production and Ford is scrambling to keep up as sales are hot for the new Fiesta ST. Ford UK reports that orders are double the expected number for the award-winning Ford Fiesta ST in its first six months in Europe. And almost one third of all orders placed across Europe are coming from the UK. Why is it so hot in the UK?

The media in the UK has been praising the small performance compact, and British consumers have been listening to what they are saying. Auto Express crowned it “Hot Hatch of the Year 2013”, while BBC Top Gear named the Fiesta ST as the winner in its competitive set, declaring: “Everything about the Fiesta ST, the steering, the handling, the responsiveness, is peerless”. Top Gear presenter Jeremy Clarkson said: “I honestly haven't driven a car as surprising or as like-able as this for a very long while.”

The new Ford Fiesta ST went on sale in the UK at the end of March and buyers have placed more than 3,000 orders. Ford set a target of 5,000 units per year and the pace is well ahead of that. The UK makes up for 56 percent of all dealer reservations across Europe. Ford says they will increase production by 15 percent to keep up with the growing demand.

Ford has hit on the right formula with the hot hatch Fiesta ST. They have given customers a compact hatch that gets good fuel economy and performance that will tear up the road. The new hot hatch brings performance-tuned steering, suspension, brakes and enhanced Torque Vectoring Control for enhanced performance in the corners. It comes standard with Recaro sports seats.

Fiesta ST comes powered with Ford’s 1.6-liter EcoBoost petrol engine that pumps out 180bhp and 214 lb-ft of torque. The compact hatch is fast and can sprint from 0-62 mph in just 6.9 seconds with a top speed of 139 mph. And it’s fuel-efficient by delivering 47.9 mpg (European combined).

Global buyers are attracted to cars with high-performance and they aren’t going away anytime soon as the proof is the sales numbers. “The customer and media reaction to the Fiesta ST has been extraordinary – it’s really become an instant classic and orders have been extremely strong,” said Roelant de Waard, vice president, Marketing, Sales and Service, Ford of Europe.  “We are doing what we can to increase production and try to meet demand.”

Ford has given European performance enthusiasts a Mountune engine upgrade, with even more power and performance. For an additional 599 euros, the factory installed upgrade gives a power increase to 215 PS, enabling acceleration of 0-100 km/h (0-62 mph) in 6.7 seconds. That’s faster than a Mercedes-Benz SLK 200 AMG Sport 7G-Tronic Plus.

A younger generation of buyers are purchasing the new 2014 Ford Fiesta ST in record numbers and it proves that consumers want both efficiency and performance. Look for this trend to continue as automakers look for ways to continue to develop fuel-efficient cars with great performance. Ford has set the tone for performance fans around the globe.