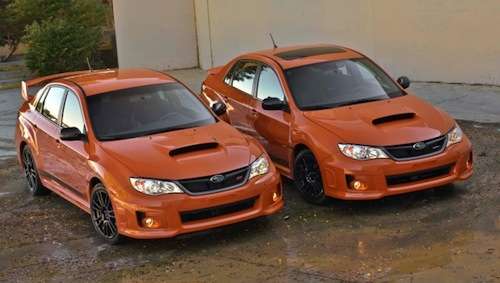 Subaru has a long history of bringing customized Subaru show cars to the SEMA Show and these two sedans arrive just in time for Halloween. And the cars are more than just scary powerful underneath, they will feature a new paint scheme on the outside that goes right along with the colors of the Halloween season.

The two 2013 Subaru WRX and WRX STI Special Editions will feature a special “Orange and Black” custom paint scheme that will now be scary on the outside. Subaru says, “You can’t just like orange with these cars, orange has to be part of your soul.” That is definitely true because you better love orange if you drive on of these bright Tangerine Orange sports sedans.

What would be more appropriate to go along with the bright Tangerine Orange exterior, than black trim. The new ultra-exclusive Special Edition WRX and WRX STI will also get jet black custom wheels, black front fender badging and black outside mirrors. The high-performance cars from Subaru will also come with unique black exterior graphics.

If the sporty WRX and WRX STI didn’t get enough attention already, the new bright Tangerine Orange color is sure to attract the local law enforcement even more now. These two cars, especially the WRX STI is made for performance and can’t be driven slow. It will be very difficult for the 300 owners who receive these cars to stay low and fly under the radar. Even at night, these two bright orange cars will easy to spot and will attract attention on the road.

Under the hood, the two special edition models will feature the Subaru boxer engine that keeps the center of gravity low on the high-performance sedans. They will also come with Subaru’s very effective Symmetrical all-wheel-drive system to keep all that power and four wheels firmly planted on the ground. The 2013 WRX Special Edition will pump out 265 horsepower with 244 lb.-ft. of peak torque at 4,000 rpm.

The 2013 WRX STI delivers the most performance of any Subaru vehicle and will pump out 305 horsepower. The performance WRX STI sedan also comes with a six-speed manual transmission and the exclusive Multi-Mode Driver Controlled Center Differential (DCCD). The race-inspired WRX STI also comes with Brembo performance brakes, Subaru Intelligent Drive, and a Multi-Mode Vehicle Dynamics Control (VDC) system that features a track performance-optimized mode. Subaru has launched a 2013 WRX STI dynamic online brochure where buyers can get complete information.

Inside, both 2013 Subaru WRX and WRX STI “Orange and Black” Special Edition models will feature a custom dark interior trim including a black headliner. To add a special-effect treatment, the Special Edition orange interior is also applied to the stitching on the seats, doors and shift boot, and custom orange trimmed floor mats. The WRX STI will be the only model to get front fog lamps.

Both sedans will officially go on sale in March 2013, but if you are interested in one of these limited run sedans, you need to act quickly. Interested buyers can contact their local Subaru dealer to get on the exclusive and short list for the 2013 Subaru WRX and WRX STI “Orange and Black” Special Edition models.