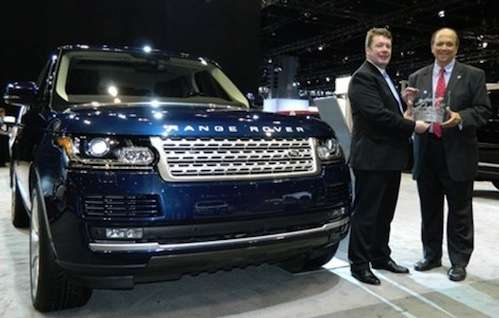 The all-new 2013 Land Rover Range Rover has been named "Best Dream Machine" by MotorWeek for its superb craftsmanship, luxury and "brute in a tuxedo" off-road prowess.
Advertisement

The all-new 2013 Range Rover is the fourth generation in the Range Rover line and is already getting recognition as the world’s finest luxury SUV. Land Rover announced that MotorWeek has named the all-new 2013 Range Rover "Best Dream Machine" as part of its 2013 Drivers' Choice Awards. The 2013 model has been redesigned from the ground up with a new lightweight body, a new chassis structure and new refinements to the interior.

The 2013 Range Rover the world's first SUV with an all-aluminum monocoque body structure that is lighter and stronger than ever before, with a weight savings of about 700 lbs compared to the outgoing model. It also gets a new aluminum platform that includes an aluminum front and rear chassis architecture with a completely re-engineered four-corner air suspension. The reduction in weight results in improved handling in the corners.

Andy Goss, President of Jaguar Land Rover North America, accepted the award at the 2013 Chicago Auto Show. The new 2013 Range Rover made its North American debut in New York last year, and was revealed to a few select U.S. customers at the 30,000 square-foot home on the former Frick estate in a New York City suburb in Alpine, New Jersey. Since then, its been making its way around the globe and getting much attention.

“A brute in a tuxedo”

MotorWeek has recognized the Range Rover for its new levels of refinement, and reinforces its position among the finest luxury vehicles on the planet. MotorWeek host John Davis at the Chicago auto show said, "The Range Rover has always been a brute in a tuxedo, but now it's dropped some 700 pounds of weight, and put on some fancier duds for truly exceptional town and country living." Goss said, "We appreciate the experts at MotorWeek acknowledging the new Range Rover as their Dream Machine award winner here at the Chicago Auto Show."

Range Rover is world-renowned for its off-road and towing prowess. The 2013 model will retain that designation and has been improved by getting the next-generation version of Land Rover's Terrain Response system.The all-wheel-drive system analyzes the current driving conditions and automatically selects the most suitable vehicle settings for the terrain.

The new 2013 model gets a acoustic windshield and side window glass that reduces outside noise. The cabin still incorporates materials that use the finest leathers and veneers. It also has more legroom for rear occupants and gets a new two-seat Executive Class seating package for more rear-seat luxury.

The all-new 2013 Land Rover Range Rover will arrive in showrooms this winter, the all-new luxury SUV has a starting MSRP price of $83,500 and will go up to $130,950 for the Autobiography trim level. It looks like the new Range Rover will maintain its position as the world’s finest luxury SUV.

Elon Makes a Cybertruck Statement With an Action, But Quiet in Words
Tesla's Record Month in China: Doubled Registrations in March 2021
END_OF_DOCUMENT_TOKEN_TO_BE_REPLACED