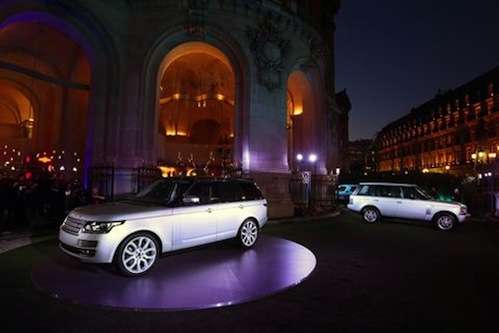 Land Rover parties in Paris with the 2013 Range Rover

The all-new 2013 Range Rover was the centerpiece of an exclusive celebration at the Paris Opera, along with the 2013 LR2 and Land Rover Defender from the James Bond movie Skyfall.
Advertisement

The 2013 Range Rover along with a few of its siblings like the Land Rover Defender and the revised 2013 Land Rover Freelander 2 celebrated in the heart of Paris at the Paris Opera. The Defender was driven by field agent Eve from the new James Bond movie Skyfall. The three current vehicles were joined by a rare, special edition 1990 Range Rover CSK heritage vehicle, a two-door model named in honor of Range Rover's first creator, Charles Spencer King.

The historic Paris Opera was the setting for an evening of Range Rover celebration with the new fourth generation model joined by its predecessors. The original Range Rover was first introduced in 1970 and has remained an international icon for its off-road performance and the world’s finest luxury SUV. Paris was the first major international show appearance for the all-new Range Rover to show the world the all-new fourth-generation vehicle.

The 2013 Range Rover has been redesigned from the ground up with a new lightweight body, a new chassis structure and new refinements to the interior. Land Rover brought the complete new Range Rover line-up, including the Vogue and Autobiography versions, and the full powertrain range. The 2013 model offers the 3.0 TDV6 diesel engine made available in Range Rover for the first time, and the 4.4 SDV8 diesel and the 5.0 LR-V8 Supercharged model.

The Land Rover completely redesigned 2013 LR2 was also on hand making its second public appearance following the unveiling in Moscow. The 2013 LR2 gets a “premium overhaul” from Land Rover. The LR2 will get new colors, new exterior styling, upgraded equipment levels and the big news is the outdated 3.2-liter six cylinder engine is gone and replaced by an all-new turbocharged 2.0-liter engine.

The display at the Paris Opera also made room for a very rare, special edition Range Rover CSK heritage vehicle. The two-door model is named in honor of Range Rover's first creator, Charles Spencer King. The rare model was also displayed alongside the latest Range Rover generation and gave a good visual reference to just how far the evolution of the the model's distinctive design has come.

The 2012 Paris Motor Show was the venue to unveil the full Land Rover lineup and the Paris Opera was the perfect backdrop to display the redesigned vehicles. The all-new 2013 Range Rover will be introduced in 170 markets worldwide and arrive in North American showrooms this winter.