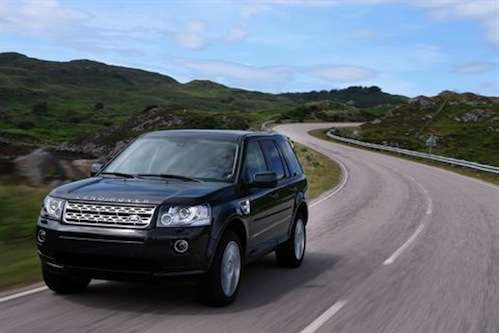 The all-new 2013 Land Rover LR2 has been totally redesigned with a new engine and premium upgrades throughout.
Advertisement

Land Rover has completely redesigned the 2013 LR2 inside and out. For the 2013 model year, the LR2 gets a “premium overhaul” from Land Rover that will go along with the launch of the redesigned 2013 Range Rover flagship. The newly updated LR2 will get new colors, new exterior styling, upgraded equipment levels and the biggest news is the outdated 3.2-liter six cylinder engine is gone and replaced by an all-new turbocharged 2.0-liter engine. The 2013 Land Rover LR2 will have a much more premium feel to it both inside and out.

The new model will also have a more luxurious interior. The cabin gets new treatments that are now found in the Range Rover Evoque and new generation Range Rover. The newly designed interior features three new colors as part of the new LR2 “Dynamic” theme. The LR2 cabin features a number of new equipment upgrades to give it a more premium feel. A new center console with a 7-inch color touch-screen is the first thing noticed.

It also gets an enhanced audio system from Meridian, a seven-day timed climate system and optional satellite navigation. Also included in the makeover is keyless start, and a new 'intelligent' electric parking brake which adjusts brake force according to the slope the vehicle is parked on. New technology includes a Say What You See voice activation system with visual prompts, and rear view camera capability are both new to the 2013 LR2.

The big news is under the hood

The all-new 2013 LR2 will feature Land Rovers new turbocharged 2.0-liter four cylinder with increased performance and fuel-efficiency. This is the same powerplant that is used in the award winning Range Rover Evoque. The old thirsty 3.2-liter straight six that it replaces will not be missed. The new turbo four will pump out 240 horsepower and 250 lb. ft. of torque. that is an increase of 10 more horsepower and 16 lb. ft. of torque over the old straight six.

The 2.0-liter engine will reduce weight in the new LR2 by 88 pounds which will increase both performance and handling. Land Rover says the new 2013 LR2 will go from 0-60 in 8.2 seconds and has a top speed of 124 mph. While fuel-mileage numbers have not been released, we know they will be improved over the previous 15/22 city/highway from the outgoing six. The 2013 LR2 will also feature an Intelligent Power System Management that reduces fuel consumption by only charging the battery when the vehicle is decelerating.

The new LR2 will come with Land Rovers legendary Haldex all-wheel-drive system and also the Terrain Response System that automatically adapts the vehicles engine, gearbox and suspension to the demands of the terrain when off-road.

Outside, the 2013 LR2 gets a more stylish exterior with all-new lights that have been redesigned both front and rear. They feature new graphics with the latest LED technology. Other key features include a new grille and fog lamp bezels, which now feature a bright finish, and all-new 17-inch alloy wheels. The new LR2 is expected to be in U.S. showrooms later this year, with pricing starting at $37,250.

The all-new 2013 Land Rover LR2 has been completely overhauled and will keep up with the rest of the Land Rover line that is growing more premium with each new generation.