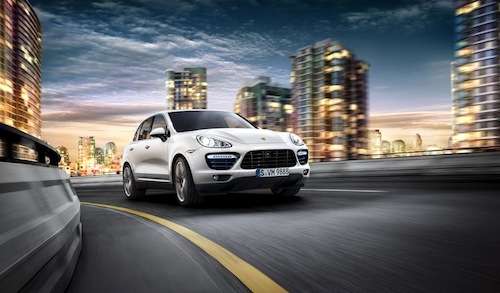 The new 2013 Cayenne Turbo S gets even more horsepower than the Cayenne Turbo and Porsche reveals the impressive details.
Advertisement

When Porsche calls the new 2013 Cayenne Turbo S a “Higher Authority”, they have it right. Porsche engineers set out to build a Porsche SUV that would surpass any previous level of performance, and they have definitely achieved that goal. The new Cayenne Turbo S is the most impressive four-door crossover to ever wear the Porsche Crest. Porsche has just revealed details on the new-generation Turbo S and they are impressive.

The new model is powered by the same 4.8-liter twin-turbo V8 powerplant as the Panamera Turbo S. That means the Turbo S gets 50 more horsepower and 37 more lb ft of torque than the Cayenne Turbo. The V8 pumps out 550 horsepower and a massive 553 lb ft of torque. That will propel the luxury grocery hauler from 0-60 in a very quick 4.5 seconds with a top exhilarating track speed of 175 mph. That’s faster than the already potent Cayenne Turbo.

The healthy twin-turbo V8 uses the latest direct fuel injection (DFI) technology with a VarioCam and charge air cooling to generate all that power. All that torque is available between 2,250 and 4,500 rpm giving it a powerful launch on the low end. The maximum 550 horsepower is generated at 6,000 rpm. The engine has a compression ration of 10.5:1 to help generate extra power. Porsche calls the new Turbo S a “powerful athlete” and it definitely has the extra muscle to deliver exceptional performance like a finely conditioned athlete.

The 2013 model uses lightweight construction and features a titanium colored intake manifold and two carbon inlays both featuring the ‘Turbo S’ logo for visual effect. The 4.8 and V8 logos are also showcased in carbon and tell much about the impressive amount of power that is available underneath the hood. With all that power, the new SUV can still deliver high performance and relatively low fuel consumption. The Cayenne Turbo S is expected to get 15/22 mpg city/highway and 17 mpg combined fuel mileage which is the same as the Cayenne Turbo model.

The Cayenne Turbo S V8 will come mated to a Tiptronic S automatic transmission and will feature all-wheel-drive for all-weather performance. It will also feature an air suspension system with self-leveling and ride-height control that will keep a constant ground clearance depending on the driving performance needed.

The new Turbo S model will come loaded with a 7-inch touchscreen display, navigation, telephone, and onboard computer to access the internet. A Bose premium 14 speaker sound system will offer 585 watts of Surround Sound for listening enjoyment. The luxury SUV will also feature a ParkAssist feature that will display visual alerts to the driver and Adaptive cruise control that automatically regulates speed depending on traffic.

Outside, the new Turbo S gets a few tweaks to the headlight housings and mirror housing that features a black high gloss treatment. Newly styled 21-inch wheels are wrapped in high-performance tires that reflect the added performance potential that is available to the driver.

Porsche has not released pricing on the all-new 2013 Porsche Cayenne Turbo S.

Elon Makes a Cybertruck Statement With an Action, But Quiet in Words
Tesla's Record Month in China: Doubled Registrations in March 2021
END_OF_DOCUMENT_TOKEN_TO_BE_REPLACED