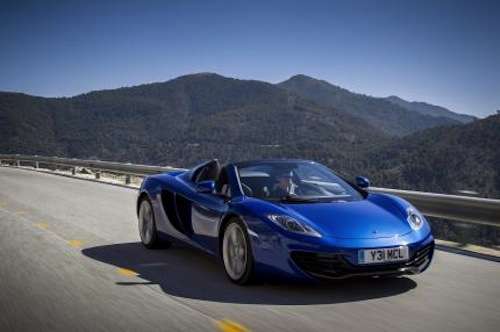 The new McLaren 12C Spider offers the same exhilarating performance as the 12C fixed-roof coupe but with a roof-down motoring experience.
Advertisement

The new 2013 McLaren 12C Spider is the second high-performance sports car from McLaren and was first unveiled at the Pebble Beach weekend earlier this year. The new Spider offers the same performance as the 12C coupe but offers a retractible hard top for open-top motoring. The 12C Spider gets the same respectable 24.2 mpg (combined) as the fixed-roof 12C, which is better than most high performance convertible sports cars.

The mid-engine 12C Spider gets a lightweight design by using the latest carbon fiber MonoCell technology that’s used in the 12C. McLaren notes that In conventional steel or aluminum chassis cars, extra strengthening is needed which adds weight and thus affects handling and performance. The 12C Spider enjoys the same rigid structure “without compromising performance, handling and driving enjoyment.”

Many automakers also limit their convertible models performance numbers, but the 12C Spider offers the same identical engine specs as the fixed-roof coupe version. It gets the same revised 616 horsepower 3.8-liter V8 twin-turbo powerplant. It will accelerate from 0-62 in just 3.1 seconds and has a top track speed of 204 mph. It was developed right alongside the 12C and gets the same McLaren driver-focused equipment.

It comes fitted with Pirelli P Zero Corsa tires to keep all four corners firmly planted on the track. The 3.8-liter V8 is mated to a seven-speed SSG dual-clutch transmission with shift paddles to send power to the rear wheels.

The McLaren 12C spider features a fully automatic two-piece Retractable Hard Top (RHT) that can be raised or lowered in less than 17 seconds. The top can also be lowered while the car is under way at speeds up to 19 mph. The roof then stows under the hard tonneau cover which incorporates twin buttresses behind the cockpit. With the roof raised, the area beneath can be used for extra cargo space.

The convertible features a heated glass rear window, which operates independently of the roof. It lowers automatically with the roof down and with the roof up it can be lowered to take advantage of the the sound of the twin-turbo engine mounted directly behind the driver. Added for protection against a rollover, a steel structure is built into the two rear buttresses to absorb any impact.

McLaren has announced the new 12C Spider will be priced from $265,750 in the U.S. and is now available to order from McLaren retailers across the globe. First deliveries to customers are planned for early next year.