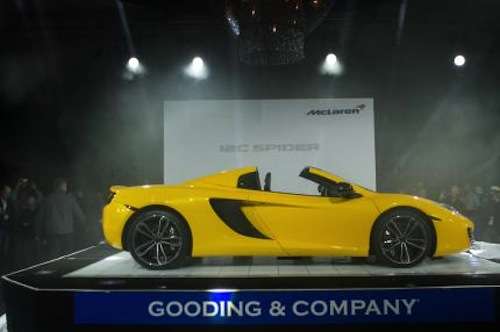 McLaren unveils the 2013 12C Spider for the first time at this weekend’s Pebble Beach Concours d’Elegance for the world to see.
Advertisement

The new 2013 McLaren 12C Spider convertible sports car was unveiled for the first time at the Gooding & Company preview at Pebble Beach over the weekend for all the world to see. Even though the British automaker revealed the car to the world digitally six weeks ago, this time they took the covers off a bright yellow open-top supercar for the first time in public.

The volcano yellow 12C Spider was introduced to the world in front of a large crowd of VIP guests attending Gooding & Company’s preview. McLaren received much of the attention throughout the Pebble Beach weekend where the 12C Spider continued to be displayed along with the McLaren X-1 one-off supercar.

The 2013 12C Spider is lightweight and uses a unique Retractable Hard Top (RHT) folding roof system that can be lowered or raised on the move, and the same carbon ‘MonoCell’ chassis identical to that of the 12C coupe. The convertible sports car is lightning quick and is powered by a twin-turbo 3.8-liter V8 producing 616 horsepower. The V8 is mated to a seven-speed SSG dual-clutch transmission with shift paddles to send power to the rear wheels.

The lightweight supercar weights just 88 pounds more than its fixed roof stablemate and will rip off 0-60 in a blistering 3.1 seconds and will clock 0-100 mph in 6.1 seconds. It will run the quarter mile in just 10.8 seconds at a speed of 134 mph. McLaren uses a glass screen positioned behind the tonneau cover to reveal a clear view of the 12C Spider’s lightweight M838T power plant.

Carbon fiber is used throughout and McLaren is a pioneer in F1 carbon fiber technology. The 12C Spider uses the same one-piece molded chassis as in the 12C. McLaren says its 165 lb. ‘MonoCell’ requires no additional strengthening for it to feature in the 12C Spider.

An electronically controlled rear windscreen sits behind driver and passenger that can be electronically lowered and raised. When the roof is lowered, it acts as a wind deflector to keep distubance to a minimum at super high speeds. To enjoy the full effect of the engine roar, the rear window can be lowered with the roof on, allowing the exhilarating noise of the 12C Spider’s V8 twin turbo engine “to flood the cabin on demand at any time.”

McLaren has announced the new 12C Spider will be priced from $265,750 in the U.S. and is now available to order from McLaren retailers across the globe. First deliveries to customers are planned for early next year.

ferrari autotrader wrote on September 28, 2012 - 10:32am Permalink
This is a topic that is near to my heart... Many thanks! Exactly where are your contact details though?