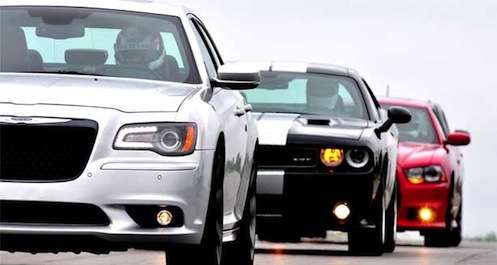 The 2012 SRT Tour kicks off on July 6th and will be making its way around the country to feature the high-performance division from Chrysler.
Advertisement

Chrysler’s high-performance division SRT, will kick off its second annual tour on July 6th featuring their lineup of performance vehicles. The Street Racing Technology division will travel to 30 locations and cover thousands of miles as they show off their 2012 lineup of vehicles over the next three months. SRT is a new stand-alone brand from Chrysler that they use to launch their high-performance production cars. The all-new 2013 SRT Viper is the latest vehicle to be introduced. Because the SRT Viper is a 2013 model, the supercar won’t be on this years tour.

Nevertheless, four drivers will take the Chrysler 300 SRT8, Dodge Challenger SRT8 392, Dodge Charger SRT8 and the Jeep Grand Cherokee SRT8 on the road for audiences to see. The drivers will take the performance vehicles on a tour of U.S. cities with the goal of visiting local enthusiast clubs and showing off SRT's latest metal. Last year, the tour traveled over 18,000 miles, over a 13 week period and visited more than 20 states and stopped at over 40 local club events and cruise nights.

This years drivers will include lead driver John "Hammer" Palazzolo, Rachel Miller, Jennifer Schneidau and Sean Yoder will all join in on the cross-country trek. The team of four drivers will visit a wide variety of venues, and drive even further this year as they plan to reach more performance enthusiasts.

The tour will depart from the Carlisle Chrysler Nationals in Pennsylvania on July 6th. From there, the team will travel along the east coast before heading to the Windy City. Palazzolo is back for the second year and excited to be behind the wheel. "SRT enthusiasts live a great lifestyle. The goal for 2012 SRT Tour is to celebrate that lifestyle with fantastic friends, incredible cars and great American roads," said John. "It gets better when you join us. We have more events planned that enthusiasts will have the opportunity to join us in."

An interactive map on the 2012 Tour page will be updated regularly with information on the dates and locations of the program, so check in regularly to see if your city is on the list.

Locations for the 2012 SRT tour for the month of July are listed below:

The SRT Tour kicks off on July 6 at the Carlisle Chrysler Nationals event in Carlisle, PA, and will end in late September at the Viper Owner Invitational in Charlotte, NC.