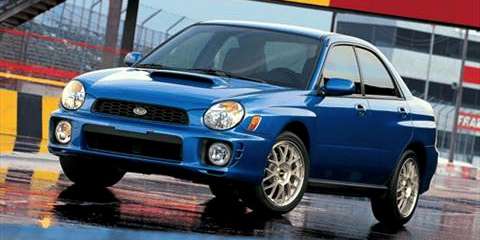 As we await the all-new 2015 Subaru WRX STI, we’ll take a look back at what started the WRX STI performance craze.
Advertisement

The all-new 2015 Subaru WRX STI is a highly-anticipated performance vehicle around the globe. What started it all here in the U.S.? The 2002 WRX was one of the hottest cars on the automotive scene when it arrived in 2001 in the U.S. There were approximately 2000 WRXs sold in the first two weeks of release in the U.S. and it was off to the races for the WRX STI success. It was such a hot ticket, Subaru began shipping almost all Japanese factory WRXs to the U.S. during June, July and August 2001. Why was the new 2002 Impreza WRX in such demand?

Knowledgeable rally enthusiasts had been familiar with the WRX race car for years. The big attraction was its turbocharged and intercooled 2.0-liter engine that developed 227-horsepower and 217 lb ft of torque. It came standard with a five-speed manual transmission. It was fast and fun to drive. Performance enthusiasts couldn’t wait to get their hands on the race-inspired production WRX when it became available. Rally-prepared Subarus had been offered in Japan and Europe for several years, but the 2002 WRX was the first to arrive on U.S. shores and could meet U.S. emissions requirements.

Performance enthusiasts were lining up three deep for the new Impreza WRX, with waiting lists at dealerships and fan websites set up even before the car was introduced. It's phenomenon was similar to, if not perhaps to the scale of, the original 1964 Ford Mustang and the 240Z.

The new WRX was more than a Impreza model with a souped-up turbo engine. Inside, the performance model featured rally-style front seats, with large side bolsters to keep driver and passenger in place during hard cornering. It also came with a “Momo” sport steering wheel. Momo was also wheelmaker to Ferrari and other exotic carmakers, so the WRX steering wheel came with the Momo logo in its center, rather than Subaru.The pedals were sporty-looking aluminum alloy with rubber grips. and just like the new 2015 WRX, it came with "WRX"-embroidered floormats.

The 99.4-inch wheelbase sports compact came in either four-door sedan or five-door hatch body styles. It had a firm ride due to its sports-tuned suspension. The WRX featured the Subaru all-wheel drive which contributed to the sports car handling and cornering abilities. The car was extremely stable with the tuned suspension that was developed after years of world-class rallying by Subaru. Customers could order ground effects moldings, a rear spoiler and 17-inch alloy wheels and performance tires to round out the impressive WRX package.

There's nothing like a generous dollop of horsepower in a compact chassis to twist the excitement dial over to the far right. The 2.0-liter turbo engine featured dual overhead camshafts with four valves per cylinder, and solid lifters for reliable high-rpm operation. The WRX engine was built for performance and reached its power peak at 6000 rpm and redlined at 7000 rpm.

WRX featured much larger four-wheel brakes as standard with big 11.4-inch front rotors and twin-piston front calipers. With this much power, it definitely needed the ability to bring things back to normal quickly. Four-channel/four-sensor anti-lock brakes were also standard on the new performance model. The new 2002 WRX was a true performance car.

The 2002 WRX was the first entry into the performance car market for Subaru here in the U.S and brings back found memories for true performance enthusiasts. It was an instant success and was the forerunner for the even more potent WRX STI that launched in 2004. This year, we wait for the new-generation 2015 Subaru WRX STI that will be unveiled this month in Detroit. Check back soon as we will feature an exclusive interview with a current 2002 Subaru WRX “bugeye” owner.

We would like to hear from current WRX/STI owners and tell us about your car.

davidmathieson wrote on January 2, 2014 - 9:21pm Permalink
my wrx is bugeye import 265bhp on rollingroad more to come gsr scotland do the work happy dayz my third scooby no car comes close for money or performance
Jack Clancy wrote on May 22, 2020 - 11:04pm Permalink
I bought a bugeye 2001 early this year. It was very nice inside, all working and the doors closed like a Rolls Royce...The rood paint was and is cracked the rest seemed ok but I would think maybe over-polished. Engine ran and accelerated well though I didn't drive the car. Brakes had been re-done. Engine bay clean but there's a leak in the exhaust crossover. Being in long grass I didn't get under it so I took some risks at $2000.00. Tyres looked ok but are not. I sent the car don to Sydney for suspension work as I do with all cars....must have spot-on suspension,steering brakes. Though my first Subaru wrx I could see a lot of junk is sold for them. The Chinese coil-overs are appalling and commonly wound down hard. There's a mania to join 'uprating' but in the wrong places, by wrong places I include the 6 speed box...The 5 speed is fine for people who drive well. When the car was checked-out...as I'd told them to bin the Chinese coil-overs...my heart sank with the other issues...notably worn timing idlers...the belt had been replaced at some stage without them being done and the radiator leaked. Every car I own and have owned over decades has had Bilstein shocks fitted by Heasmans… the best suspension place in the country and ...although there are pirates...the accredited Bilstein agents here. I trust Heamans without reservation as they have a mighty record and can modify Bilsteins to suit the car and driver. With the shock of mounting costs I decided to find some 'of the era' STI parts. The shocks are now good STI items, the strut brace is original STI, I've had new rear sway bar links fitted, The Radiator is STI, the sway bar and castor arms are STI. To me that sounds much more 'collectible' and faithful than a car with bolt on Chinese junk, boosted turbo and tuned. The tyres were pretty tired.I found. I then enquired around on Bridgestone Michelan and some others and was going to get Pirelli or Bridgestone then low and behold a set of new Michelan Pilot at Tempe tyres...for only $149.00 each fitted and balanced...bargain for the month...so 7 days to go..., from Mike Taleb. I checked that they were late 2019 or early 2020 manufactured...and that was a stipulation in the purchase.Had them fitted. To my surprise one of the Heasman 'boys' served his time on Subaru so he gave the car the 'once over'. The engine, I was told at purchase had been replaced with a 2.0L rebuilt with forged pistons...I can't say. I hope so but are forged pistons really an advantage when the motor is not going to be flogged. The timing belt and parts as well as the water pump will be replaced with genuine parts....The expert youth told me that the car showed evidence of having a 'big' motor previously. He said there is evidence of extra solenoids being fitted. It's astounding that with about 300,000 kMs on the clock that it is in such spot-on condition...It hasn't been flogged and abused. The down pipe Cat has been replaced at some stage. The crossover pipe is a ridiculous price but can be built by exhaust specialist for less than half the genuine part....that not being genuine I don't mind so much. if that's how it ends up. Whether to keep or sell is a decision yet top make. Trying to track back the car's history one of the 'history' decided to clam-up. By hard work and thinking I found much of the history from purchase to about 2000. maybe later. A woman in ACT had bought it from the major Sydney Dealer and it was well serviced along its life up until the mystery time when it was 'worked-on'. I wonder if there is a club or personal wrx register which might hep track it further (??) It's too good to NOT have a history. We'll see how it goes when I get it back as I'm in no rush. Cheers