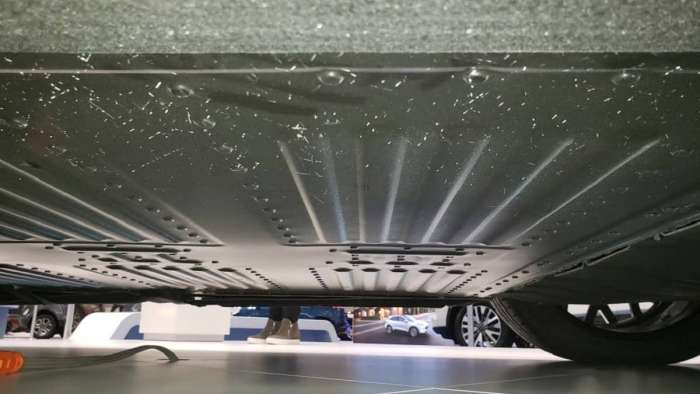 We snuck up onto Ford's display podium and grabbed the forbidden shot of the Mustang Mach-E.
Advertisement

During the recent Boston Auto Show, Torque News was invited up onto the podium where Ford was showcasing its new Mustang Mach-E electric vehicle. The Mach-E has center stage - literally and the velvet ropes were moved aside for the EV media to have a closer look.

Ford Mustang Mach-E Images
As the media took image after image from the usual angles, front 3/4 view mostly, we got dirty and laid flat on the floor to get a look underneath. "Ahh, sir, excuse me, please note that is is a pre-production model!" a nervous spokesperson from Ford said to us. "We'd ask that photos not be taken on the podium sir." Our Ford PR contact herself didn't object so we snapped away.

Mustang Mach-E Battery and Infotainment
What we wanted to see were two things; First, the battery area. The Mustang Mach-E GT is the performance trim of the Mach-E electric vehicle and the battery is part of what will make it special. Like many EVs, the Mach-E has a flat bottom. That makes the vehicle easier to stabilize and it is easier for designers to engineer reduced drag and lift. The Mach-E had a very well constructed battery compartment cover. We suspect it the same one the production Mach-E will ship with later this year and early next. 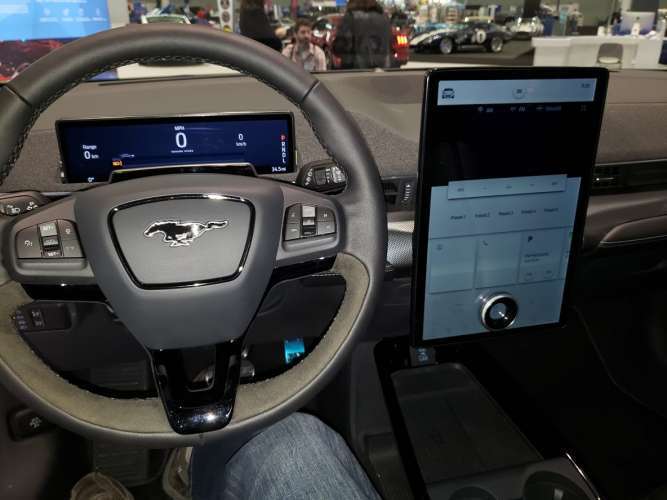 The Mach-E is beautiful in person and the Mustang cues are apparent. Particularly in the rear, where the Mustang's lights have been adapted. Yes, theMach-E will have the same signal lighting as the ICE version. However, inside is where the real change to Ford's product line is. As you can see from the image, the Mach-E's interior adopts the Tesla tablet display.

You can see more exterior images of the Mustang Mach-E at Ford's website, or by selecting one of our recent stories on the new EV.

william goszinski wrote on January 22, 2020 - 2:33pm Permalink
This ain't no Mustang....
Jimmy Dinsmore wrote on January 22, 2020 - 3:32pm Permalink
Right on William!
Jimmy Dinsmore wrote on January 22, 2020 - 3:32pm Permalink
I imagine I would be persona non grata if I tried to sneak some spy shots like this. Good job John!
DeanMcManis wrote on January 23, 2020 - 11:25am Permalink
Yeah, I recently saw the Mach-E (I'm still not calling it a Mustang) at our local car show. And one of the most impressive things that I experienced was that I could just walk right up to the pre-production Mach-E, take pictures and look the car over up close. It was on a small podium, but it wasn't surrounded by sales people. So I got some pictures of a "Storm Trooper" white and black model which looked great, for a crossover. And I got to peer in the windows. In just this Mach-E showing alone it was made clear that Ford was serious about building and selling this car. Of course I had to wade through the thick crowd gathered around a shiny, crimson red Shelby GT500 that looked like it was going to gobble up small children. I was surprised that Toyota already had a RAV4 Prime (also locked) available to see up close. There was a bright blue, exotic looking, new Corvette convertible took center stage in the Chevy area, with a sea of pickup trucks nearby, and a Chevy Bolt available to sit in over in the corner,. Toyota, Honda, and Hyundai each had their fuel cell models out on the floor, which is smart because the SF bay Area is one of the only places where you can buy lease and fuel these cool hydrogen powered EVs. Of course there were a great many exciting exotic and custom classic cars on display as well, but it is always a treat to see the newest car models in real life, and talk with friends and strangers about all things automotive. The undercarriage looks very clean on the Mach-E, and the new BEV crossover looked sportier in person than the pictures that I had seen online.
Jimmy Dinsmore wrote on January 23, 2020 - 3:08pm Permalink
I love when I can look at a car without the hovering PR people or what not.
Marc Stern wrote on February 8, 2020 - 9:32am Permalink
Good job John and Jimmy. I have a huuuuuuuge problem with that display. It is a distractor of rhe first order. I may be showing that I am just a curmudgeon, but, a screen like that is just a crash waiting to happen as the driver concentrates on it and not on the road. I know they will be trying to put larger displays into Ford trucks and I will be against them there as well. I also know that there are lots of people who believe the future is in bigger and bigger displays. I, however, am not one of them.
John Goreham wrote on February 8, 2020 - 9:39am Permalink
I think your opinion can be valid if the driver does not use the head-up display and if the driver doesn't use the steering wheel and voice controls. Personally, I like the large display for making menu changes when stopped and when one does need to use the main screen while moving it can be easier to find a huge "button" than a small one. I do like the HVAC to be separate because I can use that with just hands and no eyes.