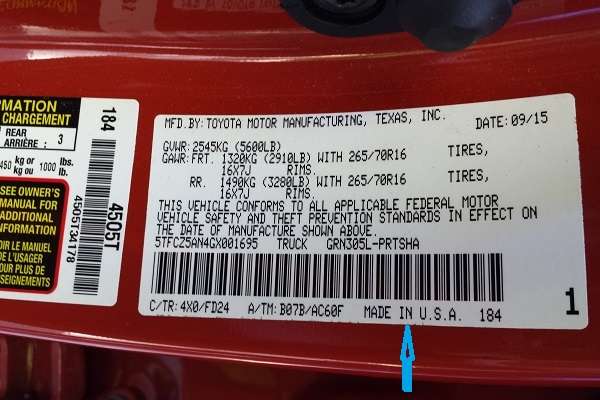 Will 2017 Toyota Tacoma Being Mexican-made Matter to Buyers

Toyota is increasing the percentage of Tacomas it makes in Mexico, rather than in the U.S. Will this matter to fans?
Advertisement

Toyota’s Tacoma is one of the hottest vehicles in one of the hottest segment right now. Midsize truck sales have exploded for GM, Nissan, Toyota, and even Honda over the past two years. To keep up with demand, Toyota maxed out its U.S. operations and is now planning to expand its TMMBC plant in Mexico to increase Tacoma production by about 25%. Will the shift matter to a company that has promoted its trucks as being made in the U.S.A?

Unlikely, is our opinion. Although the “Made In the U.S.A.” tagline is always helpful, vehicles that people like, sell, regardless of where they are made. Toyota’s main competitors for the Tacoma are the Chevy Colorado and GMC Canyon. Built primarily in Wentzville, OH, these trucks are as American as apple pie. Except for their optional, and very popular, Duramax diesel engines, which customers cannot get enough of. Those engines are built in Thailand. GM has a joint venture with Isuzu and does make some Duramax engines in the U.S., but not the ones for the midsize trucks.
- Background: Toyota preparing Tacoma factory for a successful 2015 and 2016

There are two schools of thought on what happens when an automaker adds more production destined for U.S. buyers in Mexico, Canada, or another foreign country. Some say that this expansion should have been in the U.S., and thus, the job of an American citizen has “been lost.” Another school of thought holds that since the existing production has not moved, and is still in the U.S., San Antonio Texas in the case of the Tacoma, no U.S. jobs are “lost.” The company simply chose to build the added vehicle capacity someplace else. The second group doesn’t subscribe to the notion of “opportunity cost,” something any business school graduate can explain in her sleep.
- Why Is Toyota Adding Tacoma Production In Mexico?

Right now roughly 60% of Tacomas are built in Texas, and those get the stamp you see at the top of the page. The manufacturing location stamp is on the door jam of every Tacoma. I photographed the one that is in my driveway (a media test vehicle). After the expansion is complete in late 2017, about half of the approximately 60% of the Tacomas that Toyota produces for sale in the U.S. will be built in Mexico by our math. Will drivers open that door, look for the Made In the U.S.A. sticker and only buy those that have it, leaving the Made in Mexico trucks to sit unsold? Doubtful.

David wrote on September 29, 2016 - 3:49am Permalink
Not quite the GM twins are actually the Isuzu Dmax assembled in USA but based on an Isuzu design. even the diesel was designed by Isuzu.
John Goreham wrote on September 29, 2016 - 9:29am Permalink
I believe you are mistaken. Please cite your source. Mine is GM: https://media.gm.com/media/us/en/gm/autoshows.detail.html/content/Pages/news/th/en/2015/Dec/1224_Duramax.html
Rhonda Atta wrote on May 20, 2017 - 10:50pm Permalink
I disagree with your statement that it won't matter to consumers about where the vehicle is made. I really like the look of the 4Runner. I just looked it up and found the 4Runners are manufactured in Japan. As such, I will not be purchasing a 4Runner. I do like Toyota so am considering a Tacoma. I will not purchase it if it's not manufactured in the U.S.
John Stevens wrote on July 21, 2017 - 6:10pm Permalink
Actually, you are about 50% wrong - it does matter where it's made, and "Made in Japan" is the best. I certainly would not come close to anything made in Mexico not out of home-grown patriotism but because of quite practical matter: QUALITY. BTW, when given a choice Japan or USA, I most definitely go for Japan.
Jim wrote on October 1, 2017 - 7:00pm Permalink
You might not know this but Toyota is a Japanese company. If you want to buy a vehicle solely out of patriotism, I respect that but suggest you buy an American brand then. But if you want quality, nothing beats Japan made. My USA made Tacoma is riddled with issues because guess what ethnic background makes up 80% of the Toyota plant in TX? Mexicans.
Snuffy wrote on February 17, 2019 - 10:32pm Permalink
Actually, 100% of the San Antonio plant employees are US citizens. Toyota has hired 3,000+ Texans to build Tacoma’s and Tundras. While American auto companies close US plants, Toyota has built 10 in the US, 4 in Canada, 2 in Mexico. Good on them.
Arliss wrote on May 16, 2019 - 1:41pm Permalink
There is no American made Vehicles anymore the ones that are assembled in the US have 60 70 or 80% foreign Parts on them the last time I checked Toyota use more American-made Parts than any car company
mike wrote on July 19, 2017 - 8:02pm Permalink
I am waiting for the 2019 Ford Ranger to replace my '99 Ford Ranger. Unless Ford really screws up, I will get a Ranger. If they do screw up, I will look at the Tacoma. If it is not made in the USA, I will not buy it.
Joshua wrote on November 9, 2017 - 11:41pm Permalink
Yes it matters to me where my knew tacoma is made. This thing is going to cost me with tax $36,000. That is a lot of money to hand over to Mexico win it should stay in the U.S.A. I don't know if it's possible but if I can I will specify that my truck is made in the U.S if it's made in Mexico then they should drop the price by 10,000 because of the cheaper labor.
Michael McHugh wrote on January 13, 2018 - 9:33pm Permalink
I have a 2016 Tacoma built in the US. I would have spent more and got many more options but the ones the dealer had with more options were made in Mexico. I refuse to by a vehicle assembled in Mexico again. I had 2 Silverados that were assembled in Mexico and had problems from the day I bought them. Toyota is making plenty of money building trucks in the US, if they want to build in Mexico then sell those vehicles in Mexico to Mexicans. They don't give any discount for Mexican built Tacomas and I would buy one anyway.
jim yobbie wrote on March 8, 2018 - 9:19pm Permalink
I have a 2001 Tacoma made somewhere in California it has 353000 miles looks terrible after rust serious offroading and 3 crashes but runs good yet is a daily driver and in a few years we are going to buy a new one I would not buy anything else but Toyota after seeing this non stoppable truck keep going
Will wrote on May 8, 2018 - 5:40am Permalink
I'm looking to buy a light pickup over the summer, or fall. It's guaranteed. I will not be buying a Tacoma that is made in Mexico. That is also guaranteed. I prefer the Tacoma over the Colorado, but I'll admit that the vehicle with the most American content gets more consideration. The Tacoma is my favorite vehicle so far, but I'm not going to spend the next 5 years paying off a Mexican made pickup.
Don wrote on January 4, 2021 - 12:23pm Permalink
Reply at Jim, Very little of what you drive and Fly in is made by "white" American's.. But that's ok fly your American flag on your Japanese truck built by Mexicans.. lol
james yobbie wrote on June 6, 2021 - 7:16pm Permalink
i dont care where its made i buy things that will last
From MO wrote on April 24, 2021 - 7:27pm Permalink
Colorado is manufactured in Wentzville, MO not OH.