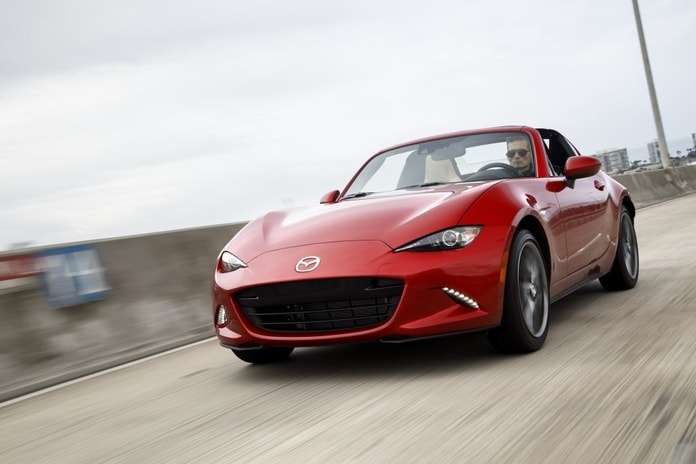 Mazda's Miata RF has found itself in 10th place on a list of supercars and super-expensive sports cars. Here's why.
Advertisement

The press sure has had fun this year with the 2017 Mazda Miata RF. Now it's Motor Trend's turn. The publication has ranked it tenth overall among all "driver's cars." There is no price constraint on the list, nor is there any reality check on the list. Many of the cars listed you cannot buy regardless of your budget because they are unicorns that their automakers hand-build in tiny numbers to win comparison tests and to thrill celebrities who have hangers full of such cars they never drive.

The $32K RF finished tenth ahead of cars such as the $110K Nissan GT-R and $215K Aston Martin DB11. Imagine, a car beating another that is seven times its price tag. That is what the Miata RF just did. What's even more impressive is that the things that kept the Miata RF in tenth, rather than at a higher spot, are all resolved for a few grand less on the convertible versions of the Miata!

Motor Trend commented on why the RF is in tenth, saying, "...although the Miata ragtop finished in third a few years back, the package isn’t improved by adding 125 pounds worth of complicated hardtop, which doesn’t accommodate a helmeted driver." A helmeted driver? So this is actually not a "Best Driver's Car" list, but rather a "Best Car For a Racetrack list?" From that perspective, the Miata RF's tenth place is even more impressive!

In second place overall was the Porsche Cayman S. The Cayman S is an amazing car, and would have been a great pick for first place overall in any sane comparison that took into account the price and actual availability of the cars tested. Motor Trend noted, "Steering is among the best here—talkative and light, quick enough but not too much. I wish the Miata handled like this.” Well, we bet that the Miata could handle like that if it were a fixed-roof car costing twice what it does. Enjoy your non-convertible driver's car Cayman owners.

The winner of the Best Driver's Car comparison was the quarter-million dollar Ferrari 488 GTB. So, technically, this is a list of racetrack cars for super-wealthy folks. One last note; the $32K Miata RF almost beat the Maclaren 570GT. Surely many of the "drivers" you know own one.