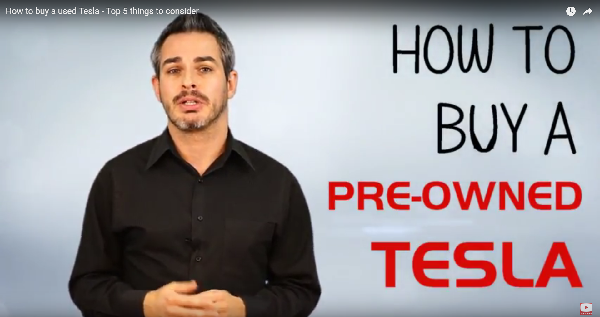 Tesla expert Alex Guberman covers a topic that many Tesla fans have been looking for help with – used Tesla buying.
Advertisement

The Tesla Model 3 may be up to four years away for some interested buyers according to Tesla expert Alex Guberman, a three-time Tesla buyer and founder of the Tesla Model S Owners Facebook Club. Alex correctly leads into his newest video by pointing out that many owners want a Tesla Model 3 due to its relatively affordable price, but don’t want to wait.

With used Model S cars now approaching the approximate cost that a new 2018 or 2019 Tesla Model 3 may have, Tesla fans can act now to drive an “affordable” Tesla sedan and then trade for a new Model 3 after the initial rush. This may be a sound move anyway, given the difficulties Tesla has had with early Model S and Model X models (Tesla forums are full of stories on that topic if you want to hear about non-functioning door handles, dead accessory batteries, and the like, but it is old news).

We won’t re-type Alex’ advice in full here, but we will give you one bit from his video. Alex suggests that buyers considering a used Tesla start first by seeing if an “inventory car” used for demonstrations is available from their local Tesla Showroom (or direct-sales dealership if you are in a state that has one). Alex says that these specific Model S cars are unique in that they can be discounted up to $25K, but still qualify officially as “new cars” that then benefit from lower financing interest rates.

The market for used Teslas is presently a "buyer's market." Tesla owners are reporting disappointing resale values on forums and clubs. On-line car sales websites have lots of inventory. BestRide for example has 16 pages of used Tesla Model S cars for sale (with about 15 cars per viewing page). CarGurus has almost 300 used Model S cars in its listings. There has never been a better time to try to buy a used Model S.

Don’t forget that a lease on a lower trim might also put you in a Tesla Model S now and carry you over to the Model 3’s full launch which is at least two to three years away.