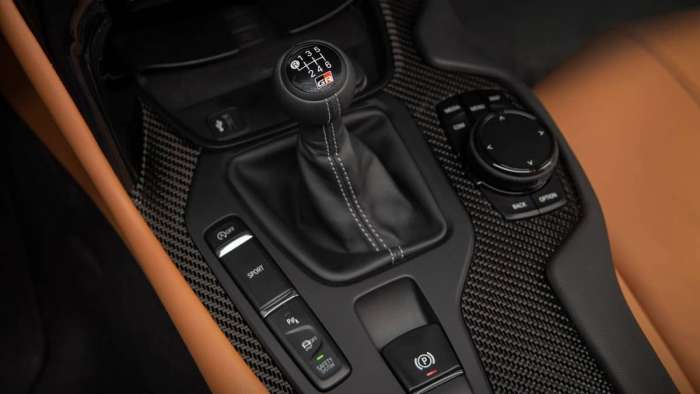 The long-awaited arrival of the stick shift Toyota Supra is now here.
Advertisement

Toyota announced today that the 2023 GR Supra available with its manual stick-shifted transmission is now ready for purchase. The manual is available on the GR Supra 3.0, 3.0 Premium, and the A91-MT Edition. The starting price of a GR Supra MT is about $54,000, and the top trims top out around $65K. These prices are before added dealer fees and markups.

“When we revealed the GR Supra back in 2019, we tapped into a heritage nameplate for Toyota,” said Mike Tripp, vice president of Toyota Vehicle Marketing and Communications. “But we were regularly asked if there would be a manual version. We immediately took that feedback to heart and started developing it, and we’re happy that we can now bring customers the perfect complement for Supra’s high-torque, high output engine with a six-speed manual.”

The six-speed manual transmission is available as an option on the Supra 3.0 and 3.0 Premium. SIn addition, it will be available in the limited A91-MT Edition model to be produced for model year 2023 in limited numbers.

Toyota GAZOO Racing Engineers worked in cooperation with Toyota Motor Europe and German transmission supplier ZF to create the GR Supra’s manual transmission. It was built with components designed specifically to suit the power and torque characteristics of its 3.0-liter 382-hp straight-six engine. One side benefit of the manual is that it is slightly lighter than the automatic.

The new manual gearbox in the Supra features new software that prioritizes sporty performance. Engine torque is optimized at the moment of clutch engagement and release. During downshifts, the software includes rev-matching for consistent performance. Yes, the software can be switched off.

The final drive ratio has been shortened from the automatic’s 3.15 to 3.46 in the GR Supra MT. The result is a quicker response when starting off and a Toyota-estimated zero-to-sixty time of 4.2 seconds.

The four-cylinder, 2.0-liter engine-equipped Supras remain automatic-only. Speak to your Toyota dealer today if you’d like to own a GR Supra. Tell us in the comments below what you find the cost and availability from dealers to be.

Image of manual transmission in GR Supra courtesy of Toyota.