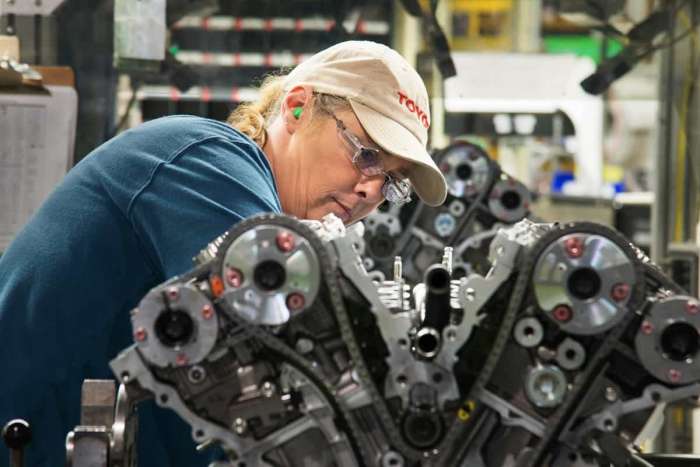 Toyota Pours Resources and Jobs Into Expanding U.S. Manufacturing - Is Your State On The List?

Toyota is adding substantially to its already impressive U.S. manufacturing operations. Here's a state by state breakdown of what the automaker is adding and where.
Advertisement

Toyota announced this week that it is expanding its planned investments in America. Through 2020, Toyota will invest $13billion in the United States. The five states that are included on this expanded list will see over 600 jobs added. This investment is not to be confused with the separate new plant that Toyota and Mazda are working together on. That Toyota/Mazda plant alone will add 4,000 new jobs to Alabama's economy. The new plant will build a new crossover for Mazda and other existing Toyota models.

“These latest investments represent even more examples of our long-term commitment to build where we sell,” said Jim Lentz, chief executive officer for Toyota Motor North America. “By boosting our U.S. manufacturing footprint, we can better serve our customers and dealers and position our manufacturing plants for future success with more domestic capacity.”

Toyota provided the media this listing of the locations and the investments to be made:

Missouri
Bodine Aluminum Troy, Missouri - $62,000,000
Investments in this Aluminum plant in Missouri owned by Toyota will help to produce an additional 864,000 cylinder heads for Toyota’s New Global Architecture (TNGA). Bodine’s 900 Missouri workers currently produce more than 3 million cylinder heads a year, which go into every Toyota and Lexus manufactured in North America. Overall, the plant represents an investment of $455 million.

Tennessee
Bodine Aluminum Jackson, Tennessee - $50,000,000
A building expansion and added equipment will double the capacity of hybrid transaxle cases and housings to 240,000 annually. The investment will also help produce an additional 288,000 engine blocks a year for TNGA. The plant’s 300 workers currently produce 1.7 million engine blocks a year, which go into the Toyota and Lexus manufactured in North America, along with 580,000 transmission cases and housings. Toyota will add 13 new jobs to its facility in Tennessee. Overall, the plant represents an investment of $365 million.

West Virginia
Toyota Motor Manufacturing, West Virginia (TMMWV) - $111,000,000
Includes a building expansion and equipment to double the capacity of hybrid transaxles from 120,000 units to 240,000 units annually in 2021. Toyota will add 123 new jobs to its facility in Buffalo, West Virginia. Overall, the plant represents a $1.4 billion investment.

Related Story: Can Toyota stay Ahead Of Honda In U.S. Auto Production?