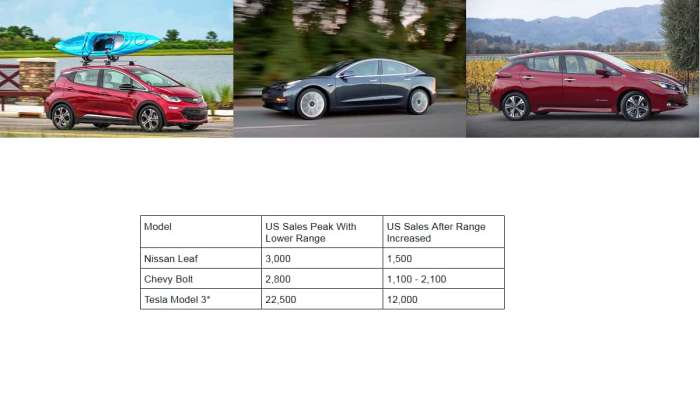 These EVs Declined In Sales In America After Range Improvements: Leaf, Bolt, Model 3

One would assume that increasing the range of an electric vehicle would boost sales and deliveries. Actually, the opposite has happened. Here’s why the Tesla Model 3, Chevy Bolt, and Nissan Leaf all saw sales declines after they saw battery improvements resulting in more range.
Advertisement

The three most widely sold battery-electric vehicles in the US market today sold in higher numbers before their range was increased. And in one case, the range increase was dramatic. Triple the original range. This seems counterintuitive given the hype about the need for battery technology breakthroughs like solid-state cells in order for EV “sales to grow.”

One common misconception about electric vehicles is that their future widespread adoption relies on breakthrough battery advancements. While that seems intuitive to those who don’t track EV sales month to month and year after year, the facts seem to point to just one big factor limiting widespread EV adoption. There are simply not enough built to meet current demand. This is because there is no mature batter supply chain and the automakers themselves don’t build batteries alone from start to finish. Ford, Tesla, Toyota, Kia, and Hyundai all sell out the EVs they produce as soon as they are built. Most are ordered prior to arriving at the dealer or delivery point. Those that do arrive on dealer lots, are sold immediately. Often at above MSRP prices.

Some models have jumped the shark. They were pretty hot stuff when they first arrived, winning awards and all that jazz. But today, they are given away at a substantial loss by the manufacturers who build them. These include the Chevy Bolt and Nissan Leaf. Without tens of thousands of dollars in both front and back taxpayer subsidies, these models cost their automakers money every time they build one.

Let’s take a look at the facts as we know them regarding the Tesla Model 3, Chevy Bolt, and Nissan Leaf and compare those models’ sales with their original lower range batteries to sales after the batteries were improved to offer longer range. By “sales” we mean deliveries, though, in this story, parsing words won’t matter much.

Nissan Leaf Sales Decline After Battery Improvements
The Nissan Leaf offers our clearest example of an EV that had a dramatic decline in sales after battery improvements. The original Leaf offered just 73 miles of range. Crazy-low if you compare that to today’s EVs. Nissan quickly updated the Leaf a few times and by the summer of 2014, its range was 107 miles. Still ridiculously low. Yet, the Leaf sold at a rate of 3,000 units per month in mid-2017, and topped 30,000 units for the year. By affordable BEV standards, it doesn’t get much better than that.

Today’s Leaf offers two ranges and has a top range of up to 226 miles. It is now selling at half its peak monthly rate, and in Q4 of 2020 averaged just 1,500 units per month. Nissan had surpassed 1,500 units sold in a month way back in 2012 with its original 73-mile range battery. If there is a correlation between range and sales with the Leaf it appears to be that as range increases, sales decline. A lot.

Chevy Bolt Sales Decline After Battery Improvements
The Chevy Bolt has been doing well by EV standards since its battery range increased from 238 miles to 259 miles. Clean Technica reported in late 2019 that Chevy managed to boost the range by “cramming more batteries in” to paraphrase the publication’s headline.

Since that time, Chevy has had some good quarters. However, in the late summer and fall of 2018, Chevy was selling Bolts at a rate of about 2,800 units per month. Following the battery increase in the summer of 2019 Chevy’s sales had dropped to about 1,100 per month, and they have since rebounded to about 2,100 per month. If there is any correlation between more range and higher sales of the Bolt we can’t find it. Today, even with Chevy Bolt discounts approaching $20,000, longer-range Bolts currently sit awaiting buyers to take them home.

Tesla Model 3 Sales Declines After Range Increase
The Tesla Model 3 is a very interesting case to look at with regard to sales and deliveries. As its first deliveries were about to happen Tesla had hundreds of thousands of pre-orders. No EV launch was more highly anticipated. Then disaster struck. Like the Model X before it, the Model 3 was plagued by production SNAFUs that dragged out its full delivery rate for the better part of a year.

Once Tesla did hit its stride, sales of the Model 3 eventually were among the highest of any car, not just EVs. In late 2018, Inside EVs analyzed VIN numbers and US vehicle registrations and came to the conclusion that Tesla had sold 22,500 Model 3 cars in America in the month of September. At that point, the Tesla Model 3 was outselling entire automobile brands.

In late 2020, Tesla boosted the range of the Model 3. In October, Green Car Reports posted an update on the Model 3 with the news that trim with the longest range had increased from 322 to 353. Yet, sales of the Model 3 are now lower than they were before the range increase. In the last month of sales, TrueCar analyzed Tesla’s total sales and came to the conclusion that the company sold 24,700 units in total of its four models (S3XY). By all indications, the Model 3 has slowed in US deliveries dramatically. Mostly because the Model Y crossover is now a big priority for the company. The way Tesla allocates inventory is also a major factor in any Tesla sales estimate. We would report the exact figures, but Tesla is unique in that it does not offer model-level sales by market.

Read any news report for a vaporware EV product not yet for sales and notice the close scrutiny of the EPA-Estimated total range figure. Most publications emphasize the importance of the range number and link it directly to the success of the vehicle. Yet, sales, deliveries, and range don’t seem to correlate in the US market as far as we can determine. If there is a correlation, it seems to be the inverse of what is assumed.

DeanMcManis wrote on March 3, 2021 - 9:11pm Permalink
It is not the best comparison to pit peak sales with current sales. After the Model 3 peak, the model Y came out and dominated Tesla sales. The Chevy Bolt similarly had their peak at the model's debut. Also when there were equal tax subsidies available to competitors. When the Bolt got it's bigger battery pack, the EUV model was rumored, and similarly, the Leaf has the coming Ariya casting a long shadow. Importantly, government support for EVs has been very poor for years, but that appears to be changing now.

Toyota's First EV Will Have a Name of BZ: Toyota BZ
First Videos From Inside The Boring Company's Las Vegas Loop
END_OF_DOCUMENT_TOKEN_TO_BE_REPLACED