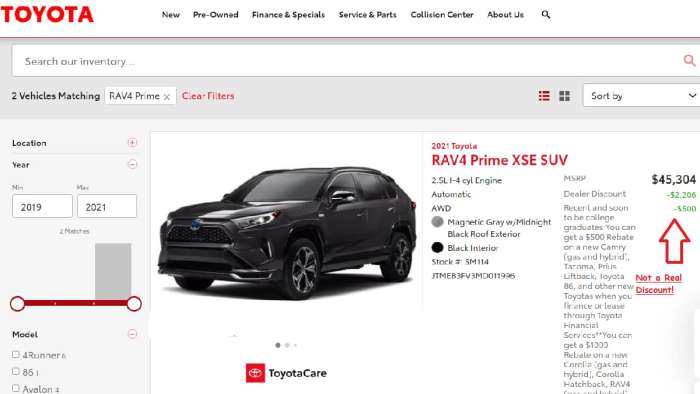 Toyota dealers gave the brand a black eye for jacking up prices of the new RAV4 Prime plug-in hybrid-electric vehicle above MSRP last year. The good news is that prices appear to be coming down to MSRP or below.
Advertisement

Toyota RAV4 Prime owners are now posting up the prices at or below MSRP that they have paid for one of these hot new plug-in hybrid-electric vehicles. The reason this is news is that the prices had been above MSPR for most of a year.

The all-new Toyota RAV4 Prime debuted last year and fans went crazy. In the mad rush to buy a new RAV4 Prime plug-in hybrid, shoppers were quickly brought down to Earth by dealers who marked up the plug-in hybrid-electric vehicle above MSRP. What a buzz-kill!

Why is RAV4 Prime Priced Above MSRP?
The reason that dealers are able to charge above MSRP for this new family crossover is simply supply and demand. The demand for a new electric vehicle with 94 MPGe, outstanding performance, all-wheel drive, and a new low-maintenance design is very high. Like every automaker, Toyota is limited in what it can produce by battery supply constraints. Furthermore, Toyota is not shipping the RAV4 Prime to all states yet. Rather, the initial model year run of a bit more than 5,000 units went to just ZEV states (typical for all new EV launches). The expectation is that for the second model year, which is about to start soon, the coming 20,000 units will be spread out more evenly across the 50 states. 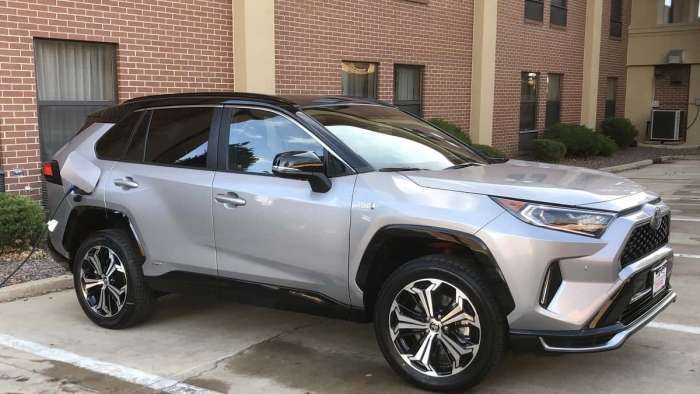 Why Are Dealers Able To Mark Up RAV4 Prime Prices?
Hot vehicles are often marked up above MSRP. Nearly every vehicle in America, including Tesla models, also comes with destination fees pushing prices above MSRP. What made this situation unusual is that the RAV4 Prime isn't a sports car, supercar, or super-low volume specialty model, but a family crossover. Of course, dealers routinely discount new vehicles below MSRP and buyers don't complain about that. According to TrueCar's latest data, Toyota's average incentive price reduction per vehicle is $2,363. However, shoppers feel it is insulting or unfair when they are asked to pay above MSRP.

Deals For RAV4 Prime Below MSRP
We won't reveal the names of any owners who purchased a RAV4 Prime below MSRP, but we will offer redacted comments they posted on one of the social media in fan clubs for the RAV4 Prime (there are numerous RAV4 Prime fan clubs with thousands of members).

In addition to the owner reports above, one Toyota dealer in New Jersey posted in some RAV4 Prime fan clubs that its price for SE trims was $500 below MSRP for a period of time in February. It was a limited-time sales promotion, but still welcome news.

Not All Toyota RAV4 Prime Discounts Are "Real"
Our top-of-page image shows a dealer-posted advertisement for a RAV4 Prime with a discount typical for Toyota vehicles. We phoned the dealer and discovered that it was a little too typical. The dealer explained that they accidentally applied the normal RAV4 discount to the Prime trim. After we alerted the sales manager of the dealer chain the price offer was removed and a corrected post was displayed.

Will RAV4 Prime Discounts Increase Soon?
The RAV4 Prime continues to be a hot seller. With its next increased delivery volume about to start in late spring, we predict that MSRP sales will be the norm, and that discounts of $500 to $1,500 will be available on SE trims. The big wildcard here will be the coming change to EV tax law that Congress is planning to institute at the request of the Biden administration. Will PHEVs be included? Will income caps preclude many buyers from being able to take advantage of the tax incentive? Nobody knows.

John Goreham is a long-time New England Motor Press Association member and recovering engineer. As part of his engineering program, John conducted a year-long study of the thermal management of electric vehicle batteries as part of a team that built an EV from scratch. In addition to Torque News, John's work has appeared in print in dozens of American newspapers and he provides reviews to many vehicle shopping sites. You can follow John on Twitter, and view his credentials at Linkedin

DeanMcManis wrote on March 1, 2021 - 5:33pm Permalink
I agree that the outcome of the new Green bill will affect RAV4 Prime prices, but I don't think that it will be because of the new bill excluding PHEVs. Primarily, the bill simply extends the previous tax subsidies for Tesla and GM, from covering 200K EVs sold, up to 600K EVs sold. So I don't think that there were any new provisions listed in the bill for eliminating PHEV credits. But I do think that if the Tesla Model Y and Chevy Bolt prices are effectively dropped by $7,000 then the added competition could have an effect on Toyota's RAV4 Prime MSRP, and dealer surcharges. It is good that Toyota is producing more RAV4 Primes, and that dealers are dropping their extra "greed" markups, but that was inevitable as EV competitors like those above and the Ioniq 5, VW ID.4, Ford Mach-E, Nissan Ariya, and others start hitting the streets. I am hoping that the RAV4 Prime shifts to follow Toyota's additional $3700 price premium for the PHEV Prius Prime over the regular hybrid Prius. With the RAV4 Hybrid starting around $28K, that would potentially put the RAV4 Prime's price at around $32K, before incentives, which would be a killer EV bargain.
NormT wrote on March 2, 2021 - 7:20pm Permalink
Who in their right mind is going to pay $45K for a RAV4? All that are left on autotrader are the expensive Primes that everyone knows do not make financial sense. Where is your NHTSA review of almost 2 million RAV4 engine fires article.
Mike wrote on April 15, 2021 - 9:02pm Permalink
All dealers in Colorado are still marking up by 10k due to almost no supply. Unreal.
Brad Klafehn wrote on April 16, 2021 - 9:51am Permalink
Yes, Mike, that confirms my experience. I tried to test-drive a Rav4 Prime two weeks ago from a suburban Denver dealer in Centennial. They said no test drive until we and you agree on a price - isn't that backwards from how the sales transaction usually works? Agreeing on a price isn't likely to happen since they are explicitly marking it up by $15,000. We are a ZEV state but availability here seems slim to none. Their greed is poisoning at least this well.
Mike g wrote on May 15, 2021 - 1:51pm Permalink
I have been checking in orange county California and all the dealers I contacted are charging 5k over MSRP on both the se and sxe trims of the RAV4 prime.
HankPlank wrote on June 17, 2021 - 9:27pm Permalink
Just checked with the dealer in Garden Grove and salesman said they're selling the Rav4 Prime with "accessories" including a security system costing about +$5k.
David L wrote on May 30, 2021 - 4:53pm Permalink
the best dealer offer for a RAV4 Prime was $4000 over MSRP in Queens, NY today
Katy F. wrote on January 24, 2022 - 5:30pm Permalink
Dealer in Culver City, CA (near Los Angeles) told me the new 2022 RAV 4 Prime XSE are about $9-$10,000 over MSRP (about $67,000) with the Premium and weather packages. So sad. We thought $50,000. was way too much to pay for this but the greedy dealer have put it way over the top.
Tim Haanigan wrote on August 20, 2022 - 9:51am Permalink
Just wait, it won’t be long before the dealerships will be unable to sell these vehicles. The economy is slowly dropping and the tax incentives will be gone. The surcharge is pure profit the dealers have demanded knowing that the consumer was getting a government incentive. This was a way for dealerships to recuperate the monies they lost due to Covid, a marketing plan that will haunt them in the future.

Tsingshan's Threat to Tesla: EV Maker Is In Battery Crosshairs
Tesla-Funded Research Reveals One of The Biggest Mysteries of EV Battery
END_OF_DOCUMENT_TOKEN_TO_BE_REPLACED