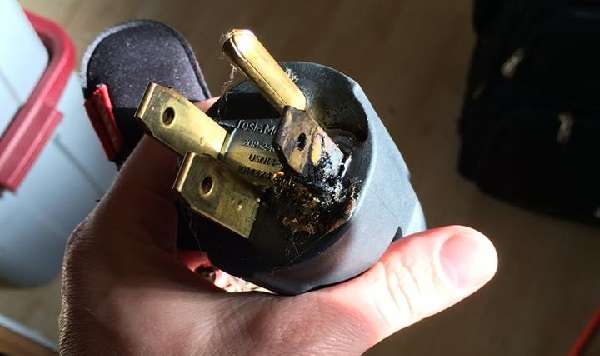 Fully two months after the official recall related to charging fires, Tesla owners alerted fix is near, but there is some confusion to clear up.
Advertisement

On January 13th an official recall notice related to the Tesla Model S' charging system and charging cable components was issued by NHTSA’s Chief of the Recall Division, Jennifer Timian. Recall notice 14V006000 relates to the electronics of the Tesla Model S charging system and also to the adapter that one of the cables, known as the UMC, which stands for Universal Mobile Connector. The electronic part was to be resolved by an over-the-air software update. That is apparently now completed on most cars. However, now fully two months after the recall notice, Tesla owners are just starting to receive letters from Tesla – by snail-mail – that promise new adapters for the UMCs.

This issue is real. Although many owners have been lucky and have had no trouble with their charging systems, many others have had their adapters melt. Many owners have had more than just melted adapters. Some have had the wiring in the home suffer thermal damage. As was covered in detail here, one home had a fire. The letters coming now (not all Tesla owners have yet received theirs as of this morning) promise new, gray adapters, which Tesla promises will arrive within 2 weeks. It seems like the fix has been two weeks away now for quite a while. Owners are also not clear on how many UMC adapters they will get. Apparently, some owners have purchased more than one.

To be clear, our feeling at Torque News is that home wiring is directly related to this issue. It seems that some homes, even if wired by an electrician, simply don’t have robust enough wiring to handle the current that the Tesla Model S uses when charging. The resulting heat from resistance can cause problems. More than one Tesla owner on a popular Facebook club we belong to has reported that they have had multiple connector issues related to melting. Tesla has modified the adapters three times according to these owners and this new change is just the latest. There is an ongoing debate by owners now about what they should do with their old adapters (return them, keep them, or discard them).

The confusion over this issue would be considered normal for most automakers. However, Tesla is typically outstanding at communicating with its fans and owners over all issues. This is a very important issue and the company could clearly be doing a better job. Tesla management spoke out loudly against calling this issue a recall, pointing out the word may not be applicable. We wrote a story supporting that view. However, with the confusion surrounding this issue, plus the time it has taken to be resolved, has us thinking the recall process may have been the right path.

Please note that the photos shown are from actual owners. Also, to be perfectly clear, the melted parts shown are blamed by the owner on poor wiring done by his electrician, not on the Model S itself.