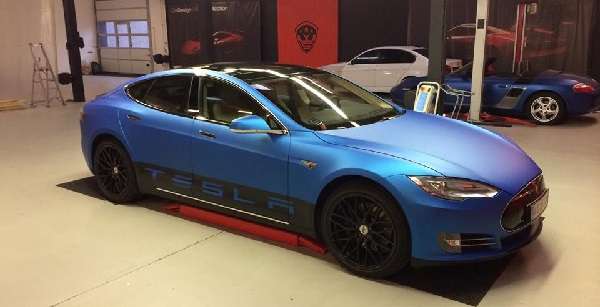 Modifications Tesla Model S owners are doing will surprise you

Although the Tesla Model S is a very exclusive car, owners love to make their car even more special. Here is what some are doing and many are talking about.
Advertisement

The Tesla Model S is not a car that seems at first in need of any modifications. It is gorgeous. It is easily one of the best looking sedans in the world at any price point. Adding more power would be like taking coal to Newcastle. Plus, how would one go about that exactly? Twice pipes? Headers? Holley double pumper? These items have no meaning in a car with no combustion. Well, at least tuners can lower the car to the ground. All they need to do is touch the dash though, and that isn’t much of a challenge! Our friends at the Tesla forums and groups have provided the real scoop (not hood) on what actual Tesla owners are doing to modify their rides and the results are amazing.

Wrap Your Tesla
The coolest modification we have seen is mostly cosmetic, but also preserves the Model S’ finish in rough winter driving. Tesla owner Ken S. had his Model S wrapped by a company in Denmark called WrapStyle. The color is matte blue aluminum from Arlon. The sweetest effect is obviously the two-tone appearance given to the car by the TESLA decal in black and the aftermarket rims in flat black. Although we have never seen a bad looking Model S, this look is unique and really seems to bring to mind an Aston Martin in this shade. Ken reports that his rims are indeed true “dubs” with 20 inch diameter rims (hey don’t you guys have the metric system over there?). The rubber is Continental WinterContact and Ken runs the same size rubber at all four corners with no trouble. Ken also added TPMS to the rims so that he doesn’t have any annoying flat tire warnings and can easily swap the rims when the sun comes out in spring.

Tesla Tech Mods
In response to a question posed by our editor, Tesla owners overwhelmingly replied they like the idea of a “dash-cam.” In some countries other than US, dash cams are very popular and almost ubiquitous in places where insurance claims are not “no-fault” like in the US. Given that the Tesla has a huge honkin’ tablet right in the dash it would also be cool if the cam was moved to a spot built into the car. Perhaps the cam could be in the mirror. Imagine if there was a USB port to extract the file for editing. One Tesla forum member Sue S. suggests a keyboard in the glove box for passengers. That would enable easy photo grabs and editing right in the car after a track day or a great touring day.

Tesla Infotainment Upgrades
The biggest surprise we had was that many Tesla owners already have a lot to say regarding stereo and information display changes and upgrades. Rather than debate them all here is the raw list. Tell us what you think about these ideas below; DVD player, Driver Profile music saving, door unlock button always visible on the screen.

Hardware Upgrades
Hardware suggestions from Tesla owners include a charcoal air filter with outside air quality sensor and significantly more adjustability in the steering effort, as in the new Q50. Having driven the Model S and living in New England my first upgrade would be a spare tire in the fronk.

Tesla Chip
We think the Model S has more performance than any road car will ever need, but we are curious to know what our readers would do if a company like those that make electronic modifications to Subaru STIs came about offering a “chip” that could dramatically improve acceleration at the expense of a modest reduction in range. Would anyone go for it? Would worries about voiding the Tesla warranty prevent that from ever being a reality? What say you Mr. or Ms. Reader? If you owned a Tesla which way would you go? Bone stock, or would you jazz it up a bit?

Our thanks to the Tesla Model S Owners Club for allowing us to include its members’ comments in this story. Photo courtesy of Ken S. Use by permission only please.

Matt Pressman wrote on December 18, 2013 - 1:54pm Permalink
Very cool, some other amazing mods for Tesla Model S owners are available at teslaccessories [dot] com -- including Center Console Insert, Reat Seat Cup Holder Solution, and even a limited edition sculpture inspired by Model S called "Driving the Future" -- most of these mods are for the interior now, but, more exterior options are coming (including a new front "grille" option).
John Goreham wrote on December 19, 2013 - 8:21am Permalink
Thanks Matt.
Michael Tieku wrote on February 23, 2015 - 12:20am Permalink
Can somebody please please please PLEASE tell me the name of those rims? I really need to know, I'm begging!