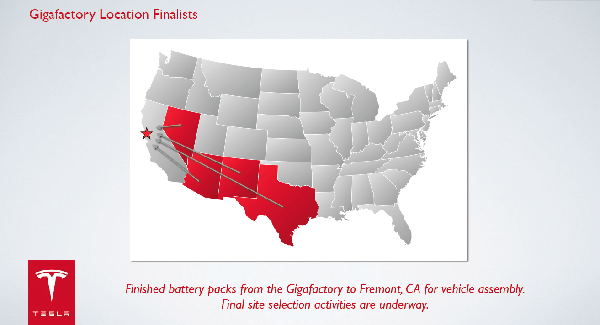 Tesla Gigafactory could be built in Texas

In a fun twist, Tesla might build a massive factory in a state that prohibits it from selling its cars.
Advertisement

Tesla announced today details of its planned Gigafactory. The factory will build electric car battery packs to power Tesla's vehicles. It may also build other types of energy storage media, perhaps for use in factories or the power industry. Tesla says that the plan has two main goals. First, to create more battery capacity by 2020 from this one factory than all the world produced last year. Second, to reduce battery costs by 30%. In what could seem like an inside joke to the Teslerati, the company announced four finalist states in which the factory might be built. Texas, the state that has prevented Tesla from selling its cars directly, is included.

Tesla is trying not to repeat mistakes made by legacy automakers. One thing it wants very badly to do is avoid using car dealerships. Tesla feels it does not need them and that their direct sales model is superior to the distribution model that every other automaker uses, and is forced by states’ laws to use. Its direct sales and service network is currently a big advantage for Tesla. Texas however, has not seen things Tesla’s way and the automaker cannot sell its cars through factory stores in the state.

This begs the question, why would Tesla reward a state with huge employment and revenue opportunities that has fought against it? The Tesla factory is expected to employ about 6,500 people directly. Local business and other suppliers that support the factory could add three times that number of jobs. It would be a huge benefit to any state in which it is built.

One answer could be that Tesla is a pragmatic. Texas has a lot of wind energy and Tesla plans to power its battery factory with renewable energy. Wind power is created both day and night. Texas is a world leader in wind power.

Another answer could be that leveraging a big benefit to the state's economy may sway legislators' and citizens’ opinions about Tesla’s sales model. So maybe it is a ploy.

Our opinion is that it is not a ploy, not a joke, and that Tesla is seriously considering Texas. The state is a non-union, business-friendly, auto producing state (Toyota makes all its US market trucks there), that ran with wind energy while states like Massachusetts fought the clean energy. Texans also have a can-do attitude and know how to make things happen. Tesla built its Supercharger network through Texas despite the sales issue. To steal a phrase well known in the state, “Tesla isn’t from Texas, but it got there as quick as it could.”

Aaron Turpen wrote on February 27, 2014 - 3:17pm Permalink
I also note that all four of these states are southern climates, which very likely plays in. Otherwise, Tesla could have all of the advantages of Texas by coming here to Wyoming or North to Montana or the Dakotas. Likely they're considering weather and supply options as part of their choice. Californians, Oregonians, and Washingtonians should note that they are not on the list. That tell you anything about your business climates?
John wrote on April 29, 2014 - 6:52pm Permalink
Actually, sorry to inform you that California has been in the running for weeks now. Texas and other states might have been used as a ploy to extract better concessions from California, however what's a fact is that state and local officials have been in contact with Tesla for several weeks now. California not only has the ability now to extract lithium from brine from geothermal sources, but such sources are in regions with ample and cheap land, global centers for renewable energy and with access to rail. You can be sure there will be generous incentives as well. Musk is no dolt, he would not invest in a state which is hostile to disruptor such as Tesla and does not allow it to sell cars due to corrupt state mafias which are opposed to change.
Aaron Turpen wrote on April 29, 2014 - 11:24pm Permalink
Based on what rumor? Tesla would be stupid to put all their eggs in one basket (California) and would be far smarter to spread out, as other automakers and industries do, in order to mitigate losses should they become too vested in one political area. Further, the same logic you're using could be used the other way. If Tesla does build their factory, or make it look like they're seriously considering building it, in a state like Texas where they so far haven't been welcome, but have relatively large sales volumes, it might be the "jobs and income" key to unlock the door and change the rules in that state.