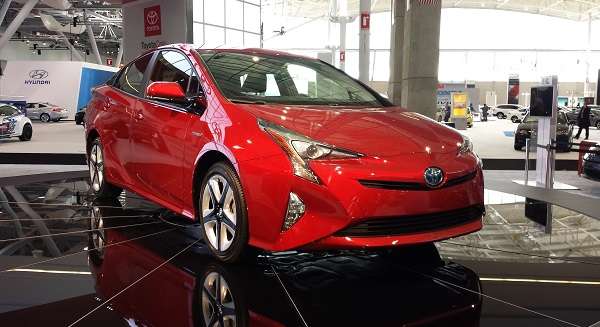 Prius Hybrid and RAV4 Hybrid Top Combined Sales Of All EVs In America – Here’s why.

Toyota’s two hybrid models outsold 27 electrified vehicles combined in 2016. The reasons are simple if you think about what buyers want.
Advertisement

For calendar 2016, Toyota’s Prius Hybrids and RAV4 Hybrid combined to generate 179,257 units sales. This number does not include the 2,474 Prius Prime plug-in hybrid electric vehicles Toyota sold in just the last two months of 2016 after its mid-November release. This total combines to surpass the sum of all electrified vehicles sold in America in 2016 by all automakers, which Inside EVs pegs at 159,139.

That just two hybrids can outsell the entire field of 27 other diverse electrified vehicles clearly illustrates that hybrids, not EVs or plug-in hybrids, are the default selection of American shoppers looking for a green vehicle. Toyota offers many more hybrid vehicle options such as the Highlander, Camry, Avalon and Lexus hybrid models, but the Prius family and RAV4 Hybrid combine well to explain two key green car segments underserved by EVs.

The RAV4 Hybrid is arguably the only affordable, all-wheel-drive green crossover for sale in the entire USA. How automakers can continue to offer new EV models based on cars defies logic, when every automaker and every industry watcher now acknowledges that the compact crossover market is the single largest vehicle segment in America (We credit GM with being the first automaker to openly admit that). Ford has come to its senses, and recently announced a future 300-mile crossover, presumably with AWD.

The Prius also solves a green transportation challenge that other customers are still striving to gain traction in solving. That being a green vehicle that offers long range, superior safety scores, mainstream value retention (trade in value) and a low cost of ownership. No electrified EV in America, except the new Prius Prime, offers buyers this common-sense list of parameters. Each “popular” EV lacks one of the key things listed. The Leaf cannot earn top safety scores. Volt is close, but its resale value is not even close to mainstream levels. The BMW i3 is arguably not affordable and does not offer long range. The next EV to join the Prius in offering what almost every family shopper wants may be the Chevy Bolt, depending upon its resale value and safety ratings.

The reasons that EVs have not gained traction go beyond just range. Automakers are constrained by battery costs, and therefore, have to cut corners on EV designs. That has not changed in 2017.

Randy Shaw wrote on January 6, 2017 - 5:03pm Permalink
Thanks, Look forward for your news and updates!