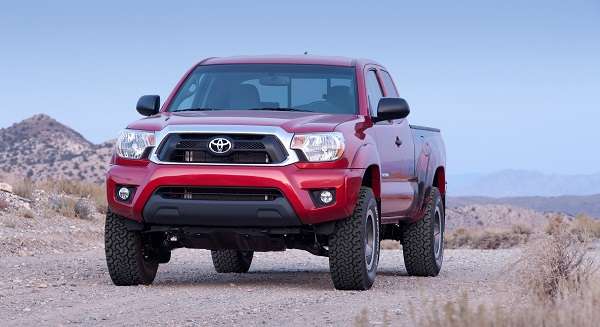 The philosophy behind Toyota holding the 2015 Tacoma back this year

Toyota’s 2015 Tacoma is facing an incredible market challenge from the Ford F-150 and Chevy Colorado. How it will “bend like a reed in the wind” this year, rather than face a stiff wind head-on.
Advertisement

The 2015 Toyota Tacoma is pretty much the 2014 Tacoma. This is not debatable. What is up for a spirited dialogue, is why did Toyota see the new Chevy Colorado, GMC Canyon, and Ford F-150 coming and chose to do nothing? The key word here is “Choose.” Toyota certainly has the means to make the Tacoma more modern and competitive, but it is letting the truck’s sales continue a multi-year slide this year for good reasons.

Reason 1 – Nothing Would Have Stopped the Chevy Colorado and Canyon
2015 is going to be a huge year for trucks. Just not Toyota trucks. Chevy went to the mattresses with the new smaller than full-size Colorado and its sibling the GMC Canyon. These trucks care coming like a freight train and Toyota trying to stand in the way of that pent-up customer demand would have been dumb. Better to just step aside and let the new smaller GM trucks have their moment.

Reason 2 – Noting Would Have Stopped the Ford F-150
The 2015 Ford F-150’s shiny bits are now non-ferrous and light (aluminum). The engine line-up is simply amazing, with two V6-turbos, one of which will have better fuel economy than Toyota’s V6. The frame is fully-boxed, 70 pounds lighter, and better in every way possible. The lights are amazing, and there are more innovations in the cargo area alone than the new iPhone6. Toyota’s Tacoma, and likely the Tundra were about to take a smack-down form the F-150 in the first 12 to 18 months of that truck’s availability so why not chill, and wait for the storm to blow by?

See More: Aluminum 2015 Ford F-150 not at risk from hail damage according to top engineer

In the amazing book, and terrible movie Dune, the main character, Paul, Muad-dib is fighting a strong opponent bearing down on him with two weapons. Rather than try to overpower or outfight the opponent (played by Sting in the Movie), he instead “bends like a reed in the wind” rather than break. Toyota just bent. Let’s hope the counter-move is as successful as in the story.