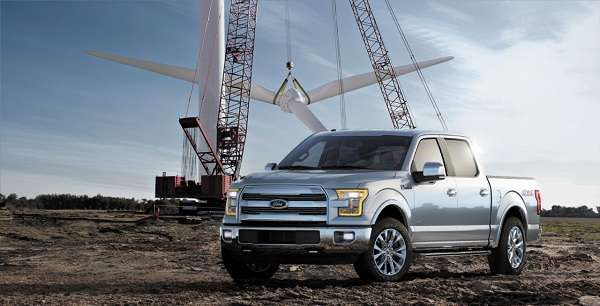 We had a chance to ask Ford’s lead F-150 Engineer one thing face to face, and we put the question of hail to the chief.
Advertisement

The 2015 Ford F-150 is new from the ground up, and the big news is that its body will be made from aluminum. Although Ford has done extensive testing on the truck, we wondered if the roof, fenders, and hood would be able to resist hail damage, and how it would compare to the steel F-150 in that regard. We were lucky enough to have a moment to speak directly to Pete Reyes, Ford’s Chief Engineer for the new F-150 and he says there is no cause for concern.

Evolution to Aluminum of the Ford F-150
At a recent technology conference organized by the New England Motor Press and held at the Massachusetts Institute of Technology, Pete Reyes, Ford’s Chief Engineer for the Ford F-150, took a small group of the automotive media through the full development of the 2015 F-150. It is an amazing story that began in 2008 and the final product's finishing touches came right down to the wire. However, the most-exciting part of the presentation for us came at the end when we had a chance to ask Mr. Reyes one question directly. We asked about hail.

Will Hail Damage the F-150's Aluminum Roof and Hood?
Our question to Mr. Reyes was “If two F-150s were in a parking lot, one current generation made mostly of steel, and the new F-150 made mostly of aluminum on the outside, is the new one more or less susceptible to hail damage?" After having heard the presentation we should have known the answer, but we were glad to hear it directly. Mr. Reyes said "Dent and ding damage is something we looked at with the new truck. Gauge and thickness has a lot to do with the resistance to damage, and we made sure the new truck was tougher."

That answers that. Our concern was that steel has both a greater hardness and also a higher tensile strength than aircraft grade aluminum. Thus, it would seem that aluminum might be at a higher risk of hail damage. However, the thickness, or gauge, of the metal is also a key factor. Apparently, Ford has used a thickness able to withstand hail.

Aluminum Not New To This Ford Team
Although the 2015 Ford F-150 may seem as if it is groundbreaking, the only thing unusual about using aluminum on the F-150 is that pickup trucks take more abuse than most vehicles. The Ford team that worked on this new truck's evolution came from the same team that worked on the aluminum cars at Jaguar-Land Rover. It should be noted that Jaguars have been made of aluminum for the better part of a century. The new Range Rover that went on sale last year, a tough vehicle in its own right, is also “all-aluminum.”

Related Stories:
The 2015 Ford F150 Debuts in Detroit as the Strongest and Most Durable Ever
New F-150 Aluminum Body May Have Higher Repair Costs

Toyota's First EV Will Have a Name of BZ: Toyota BZ
First Videos From Inside The Boring Company's Las Vegas Loop
END_OF_DOCUMENT_TOKEN_TO_BE_REPLACED