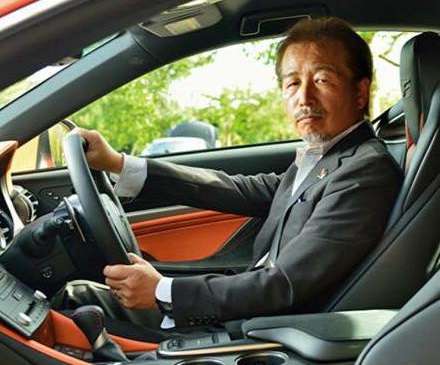 Yukihiko Yaguchi is the Chief F cars designer at Lexus. Here’s why he matters to Lexus fans.
Advertisement

French cuffs and no tie. If that doesn’t sum up the Lexus RC F as a metaphor, what does? Formal, but relaxed at the same time. We noticed this was Yukihiko Yaguchi’s look when we pulled the above profile image off of one of his many public social media pages. The RC F is a very interesting vehicle, but the man behind that car is even more interesting.

What makes the 2016 RC F special is that it was designed for you – the person who loves to drive and who buys pricey performance Grand Touring cars, but who is not a professional racer. The individual who laid the foundation for that whole concept is Mr. Yaguchi.

Yes, the RC F has now shown the world that it can hang with the best sports coupes in the world, possibly by accident. It’s track time at the hands of an expert rounds to within a second of the BMW M4 on a race track. Independent track testing found the RC F to be slightly faster on-track than the M4 and also the Audi RS 5. Motorweek tested the RC F, and they too say it is capable of hanging with the best on any racetrack. That is not what makes the RC F so special though. The really unusual thing about the RC F is that you would be fastest, and likely have the most fun, driving this car on a track compared to its peers – assuming you don’t make your living as a racer.

Here at Torque News we often call the RC F the modern-day Supra. In fact, shortly after Mr. Yaguchi joined Toyota in 1977 after his mechanical engineering studies were complete he worked on the Supra. He went on to be part of the team that developed all four generations of the Supra. Following that he created a prototype premium car using the Supra’s suspension and engine. That project later morphed into the IS.

Stepping back a bit, Mr. Yaguchi was at Toyota when Lexus was created. Eventually, he was the company’s head of development and planning. He asked to leave that key position to be the lead designer on the IS F.

From the standpoint of a Toyota and Lexus enthusiast what makes Mr. Yaguchi special is that he wants the cars he designs to be for us, not for the mainstream motor press. In an interview on Facebook, he answered a question about the IS F design by asking the interviewer “How do you think we did?” Here is the first hint of his concern for the actual owners and drivers of the cars he designs.

In an Automobile Magazine interview, he further explained the philosophy of F cars saying “The GS F will offer a Lexus F brand performance experience with a focus on fun and an easy-to-drive experience while balancing its street and track character.” Again the emphasis is not on having the best specification sheet, but the best driving experience.

In an excellent story done by Motor Trend that highlighted the vast gap in philosophies between BMW and Lexus, Mr. Yaguchi spells the truth out in plain English when asked about what cars in the market he benchmarked the RC F against, saying “No benchmark. I don't care about the competitors. I want to create what I want, which is a really high-performance car offering driving pleasure to anybody, even regular drivers.”

What we find so interesting about Mr. Yaguchi is that he is designing cars for enthusiasts and “regular drivers” that we can enjoy on public roads and track days. By comparison, some of Lexus’ competitors are simply designing racecars that can be made street-legal. Both have their place in the market, it is just nice that someone out there is designing cars for folks like us to actually enjoy, as opposed to designing street cars that are faster than the competition at all costs.

Sam Weinstock wrote on April 30, 2015 - 2:20pm Permalink
Paying homage to a man and you misspelled his name in the article... TWICE! Paragraphs 6 and 8... "Mr. Taguchi". Not to mention the other mistakes in the article. It would have been a good article if it was proofread first..
John Goreham wrote on April 30, 2015 - 5:49pm Permalink
Thanks Sam. On it. Point out the other mistakes if you have the time so I can improve the piece. Cheers,
rich k wrote on May 10, 2015 - 11:42pm Permalink
I have just purchased a new RCF... the car is amazing. They are only making 30 per month straight from Japan. Good luck finding one
John Goreham wrote on May 11, 2015 - 8:40am Permalink
I was thinking the same thing. With exclusivity comes rarity, but the dealer near me (Herb Chambers Lexus Sharon MA) had one on the floor this week when I took my IS in for service. Storm trooper white and black with carbon package. There were more RC's but I did not look closely to see if they were 350s or Fs.