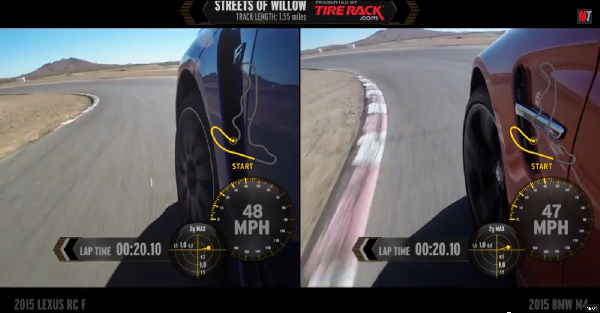 The BMW M4 is a much faster car on a racetrack than the Lexus RC F, right? Not according to MotorTrend’s time which rounded to the second.
Advertisement

The new 2015 Lexus RC F sport-coupe is a leap forward by Lexus. The IS F sedan was a very capable track car, but the RC F is at a whole new level. Concurrent to the Lexus being designed, BMW was changing its M3 coupe into the new, and much more race-capable, 2015 M4 Coupe. This article will not argue that one car is better than the other. Nobody is ever going to convince a BMW M fan that a Lexus is its equal. However, we can take a close look at MotorTrend’s professional race-driver, Randy Pobst, do a hot lap on the Streets Of Willow track after getting very comfortable with each. The difference in racetrack lap times will shock you.

Track Times
At the hands of regular driver, the BMW may be too much. For me it was. I tracked the 2015 BMW M3 (mechanically the same as the M4, but a sedan) and, like the two testers in the MotorTrend video, the car feels spooky fast to me. Putting down a fast lap is very difficult because the car can overcome its rear tires too easily. For me, it also felt like at the limit the car might snap out of my control. The RC F, on the other hand, makes an ordinary driver feel like a hero. So depending upon which type of driver you are, the Lexus may actually be the faster car. My driver training includes Skip Barber Driving School, and Intro to Racing program, plus a little track time with a handful of pros offering me tutoring over the past few years. If you have less driver training than that, you will be faster in the Lexus until you gain a bit of experience.

The track times of the Lexus RC F and BMW M4 in the hands of MotorTrend’s respected expert both round to 1 minute and 24 seconds on the Streets of Willow run in the video. We have to go to tenths of second to see any difference. The lap by the BMW was 1:23:73. The Lexus RC F put down a 1:24:05. Less than a third of a second separate these cars on the full length of a racetrack.
By all accounts, my own, the writer's from MotorTrend, and the pro driver's, Randy Pobst, the BMW M4 feels faster than the RC F. It could be the weight.

Weight of Lexus RC F and BMW M4
BMW went to great lengths to add lightness to the 2015 M4. It has a carbon fiber drive shaft, carbon fiber hood, carbon fiber suspension support under the hood, and a carbon fiber diphthong modulator. The result is a car that weighs 3585 pounds. Impressive as this is, the BMW 435i weighs just 50 pounds more. So maybe all that carbon fiber is not as big a deal as it seems. Start with mostly aluminum and taking out a lot of pounds is pretty tricky.

The Lexus RC F weighs in at 3958 pounds. MotorTrend says no coupe should weigh that much. Don’t tell the folks at Audi, whose RS 5 weighs 4,009 pounds or the folks at Mercedes, whose C63 AMG weighs 3,816. Maybe it’s the V8s that make these cars heavy?

Watch the video and see the fun these folks have driving these two great cars. Both are pretty impressive and will make their loyal fans very happy. The happiest person of all watching this must be the BMW design team, who were less than a third of a second from having a lot of explaining to do.

mike wrote on October 30, 2014 - 2:57pm Permalink
I'm sure with the TVD option activated and a non biase driver( i'm serious) it will do the same time as the Bmw.
John Goreham wrote on October 30, 2014 - 3:03pm Permalink
And don't forget, it looks like MotorTrend opted for the Carbon ceramic brakes on the M4. They seem to indicate that they did. It's not like the BMW wasn't given a fair shot at this. There are factory carbon fiber hood and roof options for the Lexus RC F and it did not have those in the video. I hope another car-mag does a similar matchup, but I have to say, this was outstanding work by MotorTrend. Maybe the best car comparison video I have ever seen, and I watch them all day long (and sometimes help make them).
Morgan wrote on October 30, 2014 - 6:32pm Permalink
I notice the as tested price of the M4 is $13,000 more than the RC F. Thirteen large will buy me a lot of driver education and suspension, starting with a stiffer rear sway bar. Of course, the elephant in the room is long-term reliability. That's why I bought a used '11 IS F instead of a contemporary M3 coupe.
John Goreham wrote on October 31, 2014 - 8:59am Permalink
Yes, pricing is tricky. The BMW carbon fiber brake option costs more than the first three cars I owned and one was new. The arms race to add more and more track oriented parts could go on forever,. What I like is that there are two excellent choices on the market. They both have their own personalities and will make the right driver very happy. I'm glad that both automakers had the motivation to do their best. Competition breeds excellence.
habitashi wrote on December 7, 2014 - 12:01pm Permalink
as always! amazing article! John can you tell us about your opinion about AMCI video test between RC F vs M4 vs RS5 ?
John Goreham wrote on December 8, 2014 - 10:12am Permalink
Thanks Habitashi. Story to come!