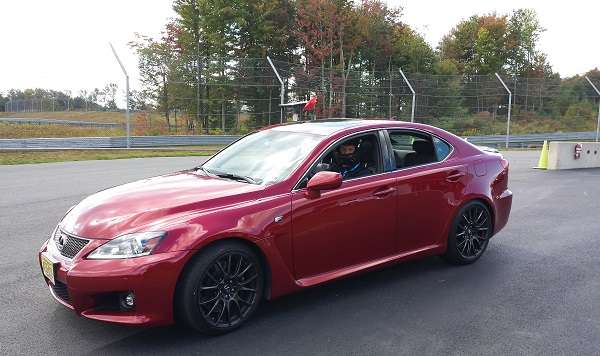 We had the chance to lay down dozens of fast laps in the 2014 Lexus IS F sedan and 2015 Lexus RC F coupe. What is clear is that Lexus built upon the IS F, and that the RC F is now miles ahead.
Advertisement

My apologies for the dramatic headline, but it is not untrue. Torque News recently had two opportunities to track the fastest of Lexus’ production cars, the 2014 IS F and the 2015 RC F. Both were run at the Monticello Motor Club, arguably the best racetrack in the Northeast. I’m a fan of the Lexus line, and owner of an IS 350C and prior owner of a Supra. What I learned over about 32 total laps in these two amazing cars is that the IS F will always be a legend, and that the RC F improves upon the IS F in almost every objective and subjective way.

IS F is a Balanced Car
Let’s start at the end. The IS F’s best feature in my opinion is its balance. It is a car with enough engine, enough brakes, and amazing handling on a road course. A semi-skilled driver, like myself, can enjoy the IS F on track for hours. With each lap, the driver can learn more and push the car just a little farther.

RC F Has More and Better Drive Modes
By comparison to the RCF the IS F has only one track setting, called “Sport.” The RC F has Sport, Sport Plus, and a setting called “Expert” that is not shown on the options in the car, but can be accessed by owners and Lexus pro drivers. These settings are what really set the RC F apart from the IS F.

In Sport Plus, the RC F’s AI (artificial Intelligence) transmission is amazing. I wrote a whole story on just this part of the car. In brief, the AI sport direct shift 8-speed in the RC F has the car in the power band all the time on track. The IS F by contrast, does not. When exiting corners the IS F can be often caught in a dead spot at the bottom of the rev band and requires a shift or two that the RC F does not. Yes, you can paddle shift both cars, but for me the RC F in Sport Plus and in the “Drive” setting was much more satisfying. It makes you much faster.

No, the IS F Does Not Have the Same Engine As RC F
With regard to engines, both share a block and not much else. However they both behave the same way. At low RPMs they have one sound, then as the revs climb and the cars “come on cam” and switch their variable valve timing to the aggressive settings, they bellow, and the thrust comes on strong. The feeling is almost like a forced induction car (supercharged or turbocharged), but more gradual and later in the rev band. The RC F is also just more powerful. Its 467 hp provide noticeably more thrust than the 416 hp the IS F has.

Seats Matter - RC F is Much Better
This may sound silly, but another area the RC F beats the IS F is with regard to the seat. The RC F holds the driver. The side bolsters in the bottom of the seat keep the driver firmly and comfortably in place. The IS F’s seat does not. I found myself sliding into the door and down when braking. So to offset this, I had to brace myself with my left leg and the dead pedal. After 8 laps, my back was stiff and sore. After 20 laps in the RC F plus another 4 in the RC 350, I was still in good shape physically. The RC F seats also worked great on-road. I drove it for 3 hours that same day on city and highway routes. Finally, the RC F seats are all ready for racing harnesses. A big plus for track cars, though I don’t expect many of the 2,000 RC F’s Lexus plans to build per year to end up track-only cars.

Both Are Great Compared to Competitors
In terms of enjoyment on-track, the two cars are both great, and they are very similar to one another as opposed to say the Dodge Challenger Hellcat, which I also drove. That car is a big, overweight, tippy thing that does not like corners. On track it behaves like the mascot at a football game, and the Lexus cars are athletes on the field.

Compared to the M3 I drove (one lap only) it is clear that M3 is much more of a track star than either the IS F or RC F. It is totally obvious and not a debatable point. However, I am faster in the RC F and prefer it. The M3 is more “industrial.” It is too serious.

I hope that Lexus will bring back the IS F using the new third-generation IS platform and the drivetrain form the new RC F. In fact, I am getting the vibe that they will, but not until after the GS F is done (next year). Given that the IS F (now out of production but still might be found for sale new) and the RC F are almost exactly the same price, what Lexus is offering in the new 2015 RC F is much better overall value than the 2014 IS F. If you are one of the handful of people considering one or the other I hope I made it clear which I would prefer and why.