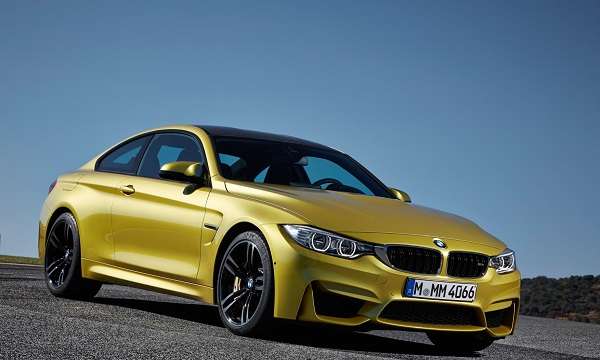 We argue no. The car magazines will set it up that way. Who do you think the cars' designers would agree with?
Advertisement

The 2015 Lexus RC F and the 2015 BMW M4 may seem like natural competitors on paper, but are they really? The leading car magazines all have a frustrating tendency to compare not the most closely matched competitors to BMW by price, but rather whatever they feel is the most closely matched car based on layout and drivetrain similarities. The result of this is that the BMWs often are 10% or 20% more expensive than the Lexus and other cars that are matched up with the BMW. Only recently have the other brands started to win those comparisons, price be damned.

The coming 2015 Lexus RC F will be a coupe almost exactly the same dimensions as the new BMW 435i and M4. It will have a powerful normally aspirated 8 cylinder engine. BMW will stop using V8s this year, and it will instead use a turbocharged six cylinder engine. Albert Biermann, vice president of engineering for BMW, had an interesting perspective for this. In a Motor Trend interview published this month he said of Lexus using a V8 and BMW not using one in its M4 “I can only imagine that, for their customers, [5.0-liter V-8 and eight-speed automatic] is the right way to go. That would definitely not be the right way to go for our customers.” We find this fascinating because the 2013 M3 coupe used a V8, non-turbo engine and had an optional 7 speed automatic (DSG) transmission. Does this mean that all of the shoppers for that style of BMW up until this instant are now no longer interested in BMW V8s? Could BMW fans have decided overnight that BMW was wrong for the past few years, and they are super excited that the company is dropping 2 cylinders and the fastest shifting option from its top performance car? The car only switched away from this configuration three months ago.

Frankly, we think Mr. Biermann is right. He and also Lexus Yukihiko Yaguchi, deputy chief engineer, Lexus F, were both interviewed and asked about their cars by Motor Trend. In his answers, Mr. Biermann spoke of the M4 as a “race-car” or of it being used as a race-car 7 times in answering only 5 questions. None of the questions were “Is this a race car?” Mr. Yaguchi never mentions the Lexus RC F as a racing car. Instead, the Lexus guy spoke repeatedly about the RC F being enjoyable and drivable by anyone. That means proficient drivers and also regular folks. The divide between the cars is going to be enormous. One is designed as a powerful, luxury street car and envisioned by its designers as such. The other is a race-car that one can place a registration on and drive on the street. Yet, the mainstream automotive publications will inevitably compare the two head to head, on both roads and on the track and then (the reviewers all being proficient if not professional drivers) will anoint the more expensive BMW the winner.

This is good marketing by BMW. It may also be good marketing by Lexus. Why pretend that Lexus owners plan to track their car? Although a stick shift option would be nice, Lexus knows that less than 5% of its buyers will take the stick. Every time I have ever been on a racetrack (not many) I have seen BMW M cars there being driven by owners and instructors. They honestly are track-able cars. Is there room in the marketplace for the Lexus RC F and the BMW M4 to both meet their customers’ and manufacturers’ expectations? There is. Sorry to spoil the upcoming comparison tests for you.

Patrick Rall wrote on April 15, 2014 - 2:56pm Permalink
What do you think is a more fitting comparison vehicle for the RC F?
John Goreham wrote on April 15, 2014 - 4:36pm Permalink
The BMW 435i may be priced very close to the RC F. Looking at the IS 350 vs the BMW 328i, they are priced very close to one another, but most folks mistakenly compare the IS 350 to the BMW 335i, which is a much more expensive car when configured with normal equipment (like Nav).
Lisa Smith wrote on April 15, 2014 - 9:02pm Permalink
I agree, tough to compare. There are many reasons why someone buys each car. An example I recently overheard at a party truly tells the difference. A women was complaining about the constant servicing of her BMW X5 and the many problems she had - then went on to add she would get another BMW in an instant. Lexus owners don't have those conversations - A) they don't buy to show up to the neighbors B) they build better quality cars. I think BMW has really turned rather boring with the 3-4 series. I don't turn my head to go "wow" when i see one - or thats a cool car. But the new Lexus IS has me turning my head everytime I see one. It just looks different and awesome - i suspect the RCF will do the same.
John Goreham wrote on April 16, 2014 - 1:49pm Permalink
Thanks Lisa. So far this story is generating great commentary. A little different from "you're dumb and your momma dresses you funny" comments I am now accustomed to :) I just saw the new 435i for the first time on the road and I thought it was a good looking car, but you're right it is not a show-stopper.
prakanth wrote on April 20, 2014 - 11:37pm Permalink
How do you know the pricing on the rcf? It's not even released yet.
John Goreham wrote on April 21, 2014 - 10:19am Permalink
Excellent point. We don't know the price levels of the RC F yet. However, we do know the prices of the similar IS F. Throughout the Lexus line comparably equipped IS vehicles cost significantly less than BMW's vehicles. In the article we surmise that will hold true for the RC F when compared to the M4. In the case of the IS 350 compared to the BMW 335i, the Lexus did win multiple comparisons to the BMW even with the much lower price point. However, we don't think that will be the case with the M4 vs RC F matchup. We expect the M4 will win those lopsided comparos.
awesomeepicguy wrote on April 24, 2014 - 8:37pm Permalink
It's sad how BMW has never made a car that's gone faster than 200 MPH. Very sad.
Alex wrote on August 24, 2014 - 11:40am Permalink
RC-F and M4 are both coupes focused on performance, and comparing those is the right thing. RCF will loose a performance car, first of all due to the weight difference. It may be a better everyday car deal than the M4, but so is honda accord- you don't really need 450hp to get from A to B. Going that route, coupes are less practical than sedans by design, starting from longer doors, and every comparo should be won by prius
John Goreham wrote on September 8, 2014 - 2:38pm Permalink
Alex, I took your comments here and made them into a full short article. The new story is on TN dated September 8th, an di sunder the Lexus link, or you can se it here, but you have to copy and paste :http://www.torquenews.com/1083/2015-lexus-rc-f-has-2-more-cylinders-and-42-more-horses-bmw-m4
Surge wrote on September 7, 2014 - 9:52am Permalink
Terrible review. First you say that since a V8 was in the last M3, the cars really should be comparable and you seem to disagree with BMW's claim that a V8 isn't suitable for M drivers. Makes sense. But then you switch and say you agree. Huh? Pick a side and stick to it. Second to call the RC F a DD street car and not a track car is fine; but so is the M. It just happens to be a more practical and more luxurious street car (4 doors, folding rear seats, full leather, rear sunshades) than the F. Finally the M is not a 'track car that can be licensed for the road'. Do you know anything about cars?! The M is a more performance oriented version of the 3 series - the road going, non-track, bread and butter car from BMW. A track car that can be driven on the street is the Ariel Atom, or Lotus Exige. Get with the program.
John Goreham wrote on September 8, 2014 - 2:32pm Permalink
Hey Surge. Please don't give up on us! This is not a Review. This is a short news opinion piece about the marketing of the RC F and M4. We drive the RC F this week and will then do a first drive report. Only if we actually get a week to test the car will a review be written by TN. - - I'm not sure where I compare and contrast the BMW's engines here, but I will admit I try very hard to see things - and offer things - from more than one perspective. The M4 is a coupe (2-door) by the way. -- With regards to whether the BMW M4 is a road-going race car, here is a quote by its designer, Albert Biermann "First of all, to go on with the tradition of bringing race car technology onto the road. That's the job of the M3 and the M4. And there's a lot of race car concept in the new car." Please stick with us. We like readers like you that want opinions backed up by facts. We will continue to try harder. Thanks for your post.