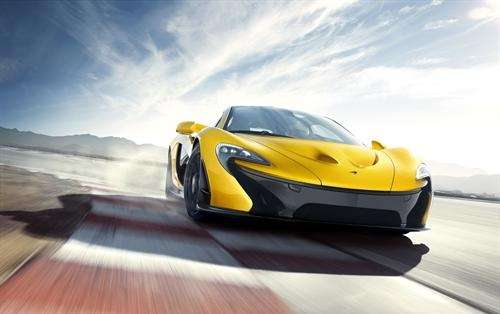 Those with a numbers fetish will love this car. If you think a 2013 Corvette ZR1 or SRT Viper GTS is fast, you should not read this. It will spoil your day.
Advertisement

The McLaren name adorns only serious automobiles. The new McLaren P1 is perhaps the company’s most serious model of all. Not only is the car a super-car by any definition, and arguably the company’s biggest leap forward in terms of technology, the car now offers some green-cred in addition to its race capability. Let’s take a look at the new official numbers released today by the company.

In the world of supercars and near supercars the spec-sheet is almost as important as the real-world performance of the vehicle. This is primarily because these cars don not exist in the real world. One does not throw the hockey bag in the back of the Veyron and head to practice at the rink. One does not drive the Ferrari to the post office and squeeze it in to the spot between the pickup truck with a ladder half tied to the bed and the sedan with kids throwing the doors wide and jumping out. These cars are Sunday cruise cars, track-day race cars, and art work displayed in custom built garages fit for such creations. In the world of specification sheet comparisons the McLaren P1 is a solid contender.

Let’s start with the time span of seven seconds. Under seven seconds is the unofficial enthusiast cut-off for a car to accelerate from 0-60 mph. Above this the car is simply not sporty regardless of what the handling is like, and regardless of how many wings and air inlets the company glues to the body (Hear that Honda CRZ?) The McLaren does not go from 0-60 MPH in seven seconds. It goes from zero to 120 mph in seven seconds. The technical words to describe that acceleration is “cuckoo fast.” At this point it is important to make a comparison of the McLaren’s acceleration to another couple of cars that many consider fast. Let’s take the 2013 Chevrolet Corvette ZR1 and the 2013 SRT Viper GTS. It takes each of these cars 7.3 seconds to achieve 100mph*. Again, by the 7 second mark the McLaren is already going 120mph. Clearly, this is not a fair comparison. You will see a Corvette soon next to you in traffic. You will likely never see a McLaren P1 anywhere – ever. It is more of a Veyron type car. Or is it?

The way the McLaren can accelerate so quickly up to highway speeds is simple. It cheats. It has a 176 horsepower electric motor that is always on. That number, 176 horsepower is how much power a Honda Accord, Toyota Camry, or other big sedan has on tap. The McLaren has that as its supplemental motor. The other motor in the McLaren generates 727 horsepower. That alone is almost 100 horsepower more than the “Vette and Viper come with. So there’s that.

The McLaren P1 can accelerate from zero to 60 mph, the benchmark performance metric all cars are judged by, in under 3 seconds. That is a very exclusive club. One can count on one hand the number of cars in production worldwide that can achieve that. For the record, the “Vette and Viper take about 3.4 seconds to get to 60 mph*. Sounds like not much of a difference, half a second, but consider that it is almost 20% slower and it puts it in perspective.

The McLaren is a European car. The continent is still fascinated by units of measure that have a base of ten. This despite the fact there is no base ten time measurement. Nonetheless, they like to measure their big dog’s sprints from 0-300 km/hour. That is a little under 190 mph. The McLaren P1 can get to this point in under 17 seconds. Yes, it is hard to be impressed by anything called 17 seconds, but consider that this is fully 5 seconds faster than the legendary McLaren F1 supercar and it gives it some punch. McLaren won’t say how fast the P1 can go at top speed, but it will say that it is electronically limited to 350 km/ hour. Our exacting conversion of that to units Americans use is “way past 200 mph.”

The McLaren is very easy on the eyes. For a gallery of the car, please click here. Our own Patrick Rall has done an excellent job detailing the drivetrain of the vehicle and that can be read by clicking this link. Comment below and let us know if you think this car is superior to the Bugatti Veyron. There is not much else to measure it against.

*Performance of the Corvette and Viper per Motor Trend’s March 2013 issue. Page 53.
McLaren numbers per the manufacturer.