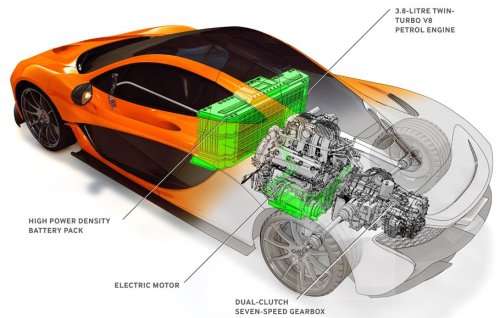 McLaren has just announced the drivetrain details for their upcoming P1 supercar and the specs are better than many expected – with over 900 horsepower from a hybrid drivetrain that also allows for brief periods of all electric, emission free driving.
Advertisement

More importantly than the fact that the electric drive motor adds 176hp and 192lb-ft of torque to the McLaren P1 is how that power is applied. Using the McLaren Instant Power Assist System (IPAS), the electric motor provides that power from the second the driver hits the accelerator pedal. This eliminates what little lag is present with the 727hp twin turbocharged V6 for improved low end performance but it also helps require less effort by the motor so under non-performance driving circumstances – it makes the P1 more efficient.

Thanks to the unique architecture of the McLaren P1 hybrid drivetrain setup with the electric drive motor mounted on the side of the engine block, all power is funneled through a seven speed dual clutch gearbox for what the company promises is a seamless cooperation between the two different power sources. The other advantage with this type of hybrid setup is that the electric drive motor can provide instant negative torque to get the engine revs where they need to be as quickly as possible for the ideal, high speed shifts. This hybrid drivetrain also allows the driver to select an all-electric mode which will allow somewhere in the area of 6-7 miles of continuous emission free driving which is ideal for traffic conditions when you simply don’t need to have 903 horsepower. This electric drive mode also allows for silent travel so if the owner of the McLaren P1 is creeping through his plush neighborhood of billionaires – he won’t upset any of the old money. When the battery is depleted, the gasoline automatically fires up to both power the car and begin recharging the battery with the charging process aided by a regenerative braking system.

Finally, the new McLaren P1 supercar will feature the company’s Drag Reduction System for increase top speeds. This technology debuted on the MP4 race car with a adjustable flap on the rear wing of the endurance race car but for the new P1, the entire wing will adjust its angle. This reduces drag which increases the car’s top speed capabilities while the downside to this is less downforce so the company points out that this system is ideal for creating straight line speed. The DRS system turns on, lowering rear end drag by around 23% at the push of a button on the steering wheel and it deactivates when the driver hits the brake pedal.

The McLaren P1 supercar will make its grand debut at the 2013 Geneva Motor Show next month so it won’t be long before we have a very good look at the newest halo car from the British sports car builder. The P1 will join other range topping supercars debuting in Geneva including the production version of the Ferrari F150 Project that will serve as the successor to the Ferrari Enzo along with the new Lamborghini 50th anniversary celebration car that is promised to be the highest performance Lambo ever. Like the P1, the Ferrari F150 Project is a hybrid supercar so while fuel prices are going up around the world, the supercar market is becoming no less popular thanks to hybrid technology that reduces emissions and improves fuel economy without compromising performance.