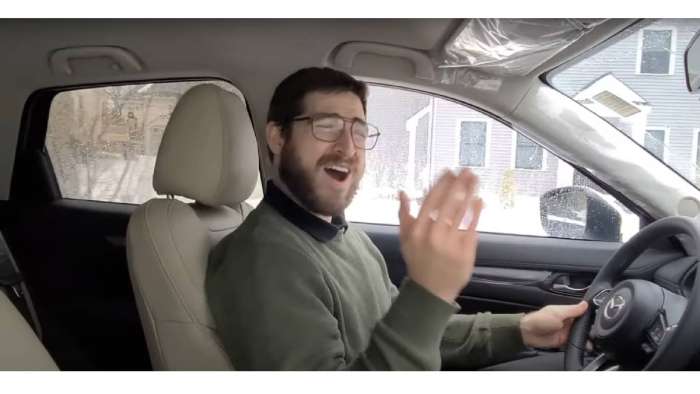 One local Mazda dealer in Mass. produced what we think should be an award-winning video.
Advertisement

It may surprise readers to know that most of our contact with automakers is direct, not from dealers. We have nothing against dealers, we just have a direct line to the folks who we know have the answers we need, so dealers are generally off our radar. Until today.

Andrew Schiffer isn’t a flashy Youtuber with a pro camera operator behind the lens producing glitzy content. Like we wish we were. Rather, he’s a product specialist at Wellesley Mazda in Massachusetts with an iPhone. He is participating in a sales contest of some kind to see which person could create the best video. He has our vote.

As you can see from the video, Andrew chose Mazda’s now standard-on-all-crossovers all-wheel drive system as the topic of his video. There is something about “20-times per second,” "27 sensors" and “confidence” in the song. That sums up the AWD message pretty well. We really liked Andrew’s singing and his fun acoustic-electric guitar (Watch the video for that to make sense).

We don’t know much about Andrew, but based on his YouTube Channel content we suggest he spend more time with his dog Russet and less time on his skateboard. If you enjoyed his Mazda AWD video maybe throw him a like. He is also on Youtube Subscriber number three, so if you hurry, you can be one of his very first subscribers!

Rock on Andrew! We hope you win the contest.